For those who have been hankering for fresh news regarding Bonang’s suit against Rea Gopane, the businesswoman has got something new to share – she isn’t backing down in her suit against the local YouTuber.

Here’s the backstory, if you please. In a recent post, Rea Gopane had stated that Bonang had a drug habit and had transferred the same to AKA, whom she dated at the point. (AKA is currently reeling from the apparent suicide of his fiancée Nelli Tembe, with alcohol and drugs said to to be among the roots of their tempestuous relationship).

Rea Gopane had said media personality Scoop Makharbibi told him about Bonang’s drug habit. A furious Bonang had slammed Rea with a R500k suit, forcing him to apologize in a statement released on Twitter.

In another tweet, he had made a joke of his earlier apologies and been forced to release another, in video.

With the case no longer trending, a fan had asked Bonang if she had received her R500k from Rea Gopane. In response, she made it clear that the YouTuber was served a summons that morning. You can check out the tweet below. 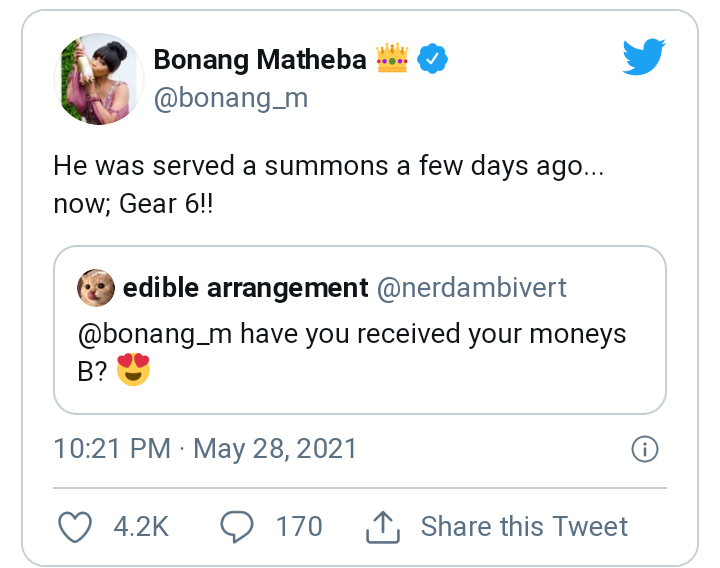 What do you think, though? Share your thoughts in the comments.

Tags
Bonang Rea Gopane
John Israel A Send an email 2 June 2021
Back to top button
Close
We use cookies on our website to give you the most relevant experience by remembering your preferences and repeat visits. By clicking “Accept All”, you consent to the use of ALL the cookies. However, you may visit "Cookie Settings" to provide a controlled consent.
Cookie SettingsAccept All
Manage Privacy