Boosie Badazz may be one of the most controversial people on the scene but he’s also about the paper. According to a recent tweet shared by the rapper, he is offering Facebook and Instagram CEO, Mark Zuckerberg, $100k to get his Instagram account back.

Remember his account was suspended about a month ago for sexually explicit content. At the time, he went on an angry rant calling out the billionaire “I dont even know what I did but this is how I feed my family”. He revealed that since rappers haven’t been making any money, it was his means of making some.

In an interview on VladTV, he revealed that he had been careful about sharing sexually explicit content since Trey Songz was stopped. Now, he’s offering to pay a hundred grand to get the account back. Hopefully Zuckerberg reads tweets. 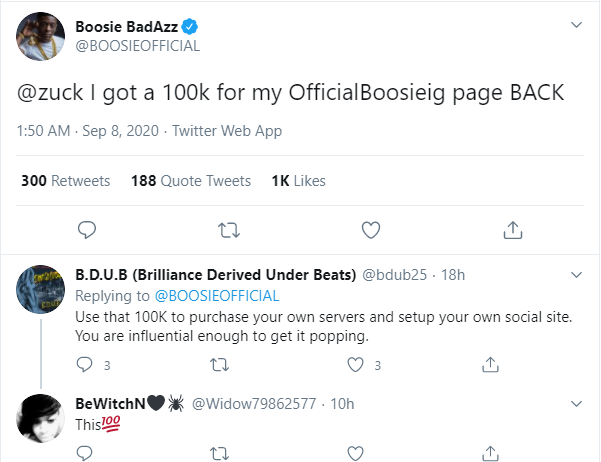 Tags
Boosie Badazz
John Jabulani Send an email 9 September 2020
Back to top button
Close
We use cookies on our website to give you the most relevant experience by remembering your preferences and repeat visits. By clicking “Accept All”, you consent to the use of ALL the cookies. However, you may visit "Cookie Settings" to provide a controlled consent.
Cookie SettingsAccept All
Manage Privacy