Jack Harlow might be a rapper, but he doesn’t know one of the most iconic songs out there by Brandy, “Angel in Disguise” — or so he made it seem.

Jack Harlow was in an interview during which he ignorantly asked who Ray J’s sister was. The clip of the encounter was shared by Brandy’s fan account, and  Brandy, unimpressed by Jack Harlow’s ignorance, noted that she would “murk” him in rap on his own beats and then sing his ass to sleep. You can check out the post below.

.@jackharlow finds out Brandy and Ray J are siblings during interview to HO7 97 pic.twitter.com/dIFcbLOaP1 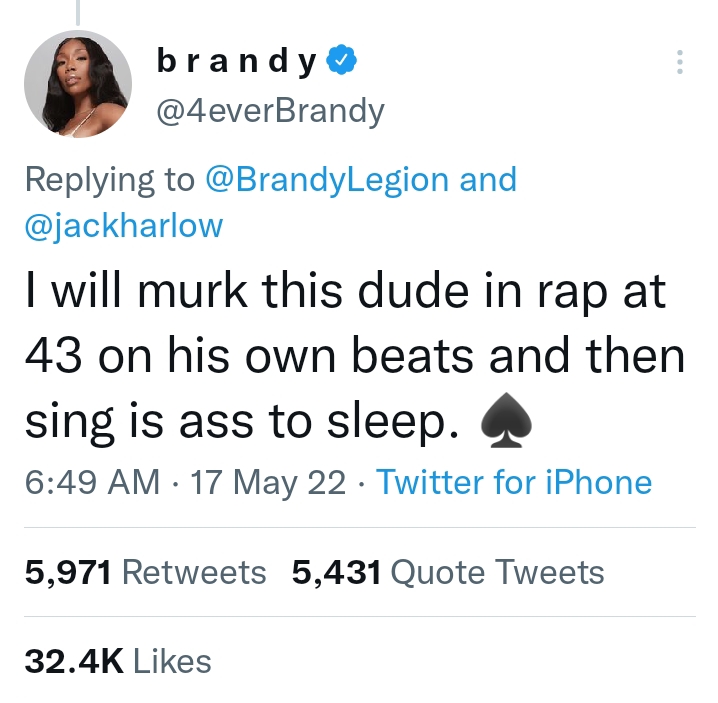 True to her word, she popped on Ebro in the Morning on Hot 97, the same show where Harlow had advertised his ignorance of hip hop history, and rapped back at Jack.

In a follow-up tweet, she indicated that the whole exchange wasn’t really serious and people shouldn’t take it too seriously. “I can have a little fun, too,” she wrote with heart emojis.

Brandy may not be as active as she was in her heyday, but she remains one of the most-loved musicians. And with a voice that is a benediction to the soul, she’ll surely be around for a long time.

Tags
Brandy Jack Harlow USA
John Israel A Send an email 26 May 2022
Back to top button
Close
We use cookies on our website to give you the most relevant experience by remembering your preferences and repeat visits. By clicking “Accept All”, you consent to the use of ALL the cookies. However, you may visit "Cookie Settings" to provide a controlled consent.
Cookie SettingsAccept All
Manage Privacy