She was one of the favorites in the South African telenovela The Queen and viewers just can’t get enough of Brenda Ngxoli’s acting. She had played the role of Noma in the popular series.

And then out of the blue, a popular blogger named Phil Mphela had claimed in a tweet that Brenda had left the flick over a “salary issue” that could not be resolved with the production team.

Reacting to the tweet, however, Brenda was dismissive of it. According to her, she’s never had a salary dispute with the production team of the popular series.

She insisted that Connie Ferguson and the Ferguson Films company pay her well. To emphasize how serious she was about her claims, she tagged Connie to the tweet. 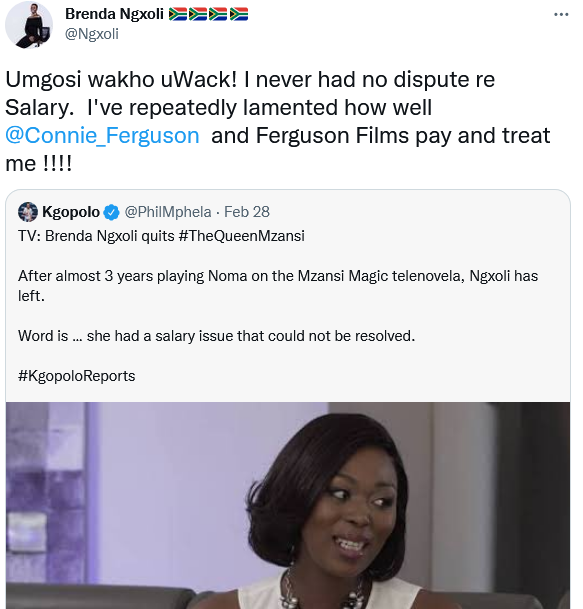 Last we checked, though, Connie hasn’t said anything regarding Phil Mphela’s claims. But her daughter Lesedi, a casting director at Ferguson Films, had denounced Phil Mphela’s claims, wondering why the blogger should elect to ruin the career of an actress who has done nothing to her.

Interestingly, M-Net, which broadcasts the series, is yet to say anything regarding Mphela’s claims. The body promised to release a statement regarding the whole drama later this week.

Should fans expect a bombshell?

Tags
Brenda Ngxoli Phil Mphela
John Israel A Send an email 1 March 2022
Back to top button
Close
We use cookies on our website to give you the most relevant experience by remembering your preferences and repeat visits. By clicking “Accept All”, you consent to the use of ALL the cookies. However, you may visit "Cookie Settings" to provide a controlled consent.
Cookie SettingsAccept All
Manage Privacy