It’s been a long and exciting acting journey for Bruce Willis, and now the iconic actor will be taking a bow after he was diagnosed with aphasia.

Aphasia is a medical condition that affects a person’s ability to communicate. It results from injury or damage to Broca’s area and Wernicke’s area, the language parts of the brain.

The news of the actor taking a bow from acting was announced by his family in a post on Instagram.

In the post, shared by Demi Moore, the actor’s ex-wife, the family noted that the actor’s cognitive abilities had been impaired by aphasia, and he’d therefore be taking a bow from acting.

Acting meant so much to him, but with the current medical challenges at hand, it’s near impossible to perform optimally as an actor as he used to. So, he’s “stepping away” from that career.

It’s a difficult time for the family, which has managed to put up a solid and united front to ensure that Bruce gets the best going forward. The family thanked fans for their support so far. 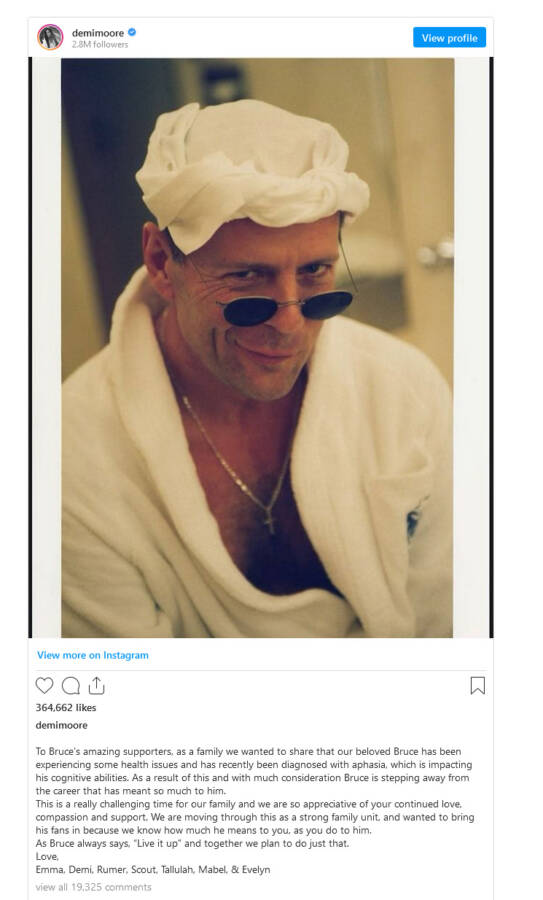 Tags
Bruce Willis USA
John Israel A Send an email 31 March 2022
Back to top button
Close
We use cookies on our website to give you the most relevant experience by remembering your preferences and repeat visits. By clicking “Accept All”, you consent to the use of ALL the cookies. However, you may visit "Cookie Settings" to provide a controlled consent.
Cookie SettingsAccept All
Manage Privacy