Cardi B hits back at haters after Roddy Ricch received his Grammy.

Everyone knows people love to hate on Cardi B. But she isn’t going to let them win. Well, she’s Cardi and that’s her thing. The “Be Careful” hit maker was recently dragged on social media for “showing off” her Grammy.

About a year ago, her debut album “Invasion Of Privacy” won “Rap Album Of The Year” and she got a lot of hate for that. Seems people have yet to let it go because when it came in the mail a few days back, she got dragged for unboxing it in her Stories. Haters called her out for “showing it off”.

However, Roddy Ricch got his recently for his work on Nipsey Hussle’s “Racks In The Middle” and took to social media to celebrate. As congratulatory messages poured in, Cardi called out her haters for saying she was showing off her Grammy. She asked where they were when Roddy was celebrating his. According to her, she was merely unboxing her mail. 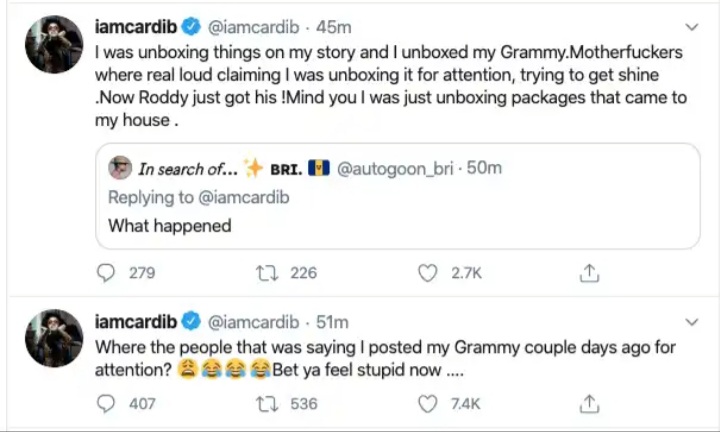