There’s great news for Cardi B ad Offset fans – speaking of fans of their union. They are getting back together…

Cardi B recently filed for divorce from the Migoss mate, citing “Irreconcilable difference.” Divorce papers had suggested there was no going back on the move for the dissolution of the marriage.

When Cardi B celebrated her birthday days ago, Offset bought her a Rolls Royce, which Cardi B received gratefully, in the company of friends and fans.

Thereafter, during a convivial evening with friends, a clip had circulated online showing Cardi B jumping onto Offset’s recumbent form and giving him a groin dance.

Whatever might have provoked a divorce in the first appears to have been resolved right now as the “WAP” rapper has revealed she’ll be getting back with Offset. The reason? The songster apparently has a premium pedunda. Check out the tweet below. 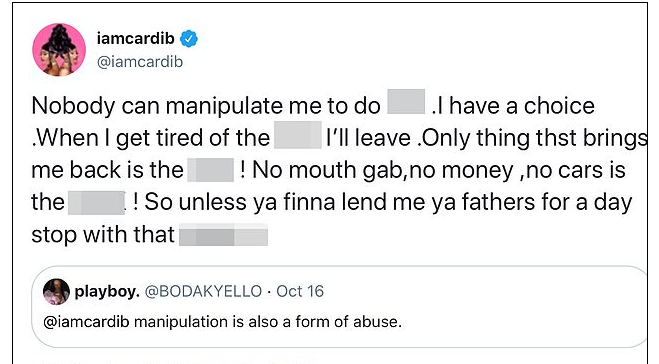 Well, what do you think about the reunion?