Controversial rapper Cardi B has slammed those saying she is only confident when she makes up and not in her own skin. What better way than to show off her natural self?

In an Instagram post, the songstress, who recently made up with hubby Offset halfway after filing for divorce, showed off her natural face (twenty minutes after waking up, according to her). 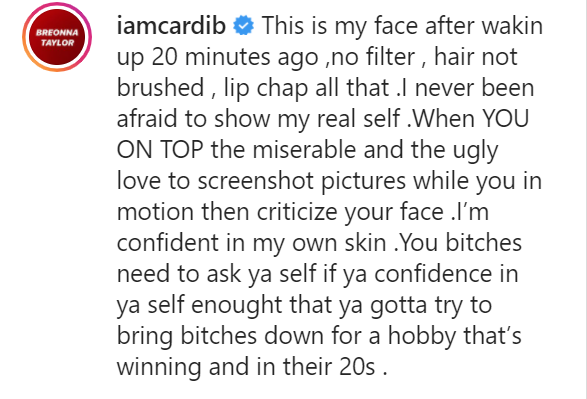 From the clip she shared, she looks just as good without make up. But would this ultimately silence her critics?

By the way,Card B recently treated fans to a new single titled “UP,” after getting them “ahing” with a teaser. The track indicates that she is still up there, a controversial rapper living her life on her own terms, attracting and annoying people in equal measure.

What do you think of Cardi B’s Instagram rant, though? You might want to join the conversation by dropping your thoughts in the comment section below.

Tags
Cardi B
John Israel A Send an email 10 February 2021
Back to top button
Close
We use cookies on our website to give you the most relevant experience by remembering your preferences and repeat visits. By clicking “Accept All”, you consent to the use of ALL the cookies. However, you may visit "Cookie Settings" to provide a controlled consent.
Cookie SettingsAccept All
Manage Privacy