South African rapper Cassper Nyovest recently got a shout out from Beyoncé and Global Citizen, and all he could do was declaim, “Wow!” Who wouldn’t be excited getting mentioned by global forces?

Beyoncé has a partneship with Global Citizen, dubbed BeyGOOD, which has been celebrating black artistes around the world in the spirit of Black Music Month. Cassper Nyovest, who had once shared the stage with Beyoncé during the Global Citizen festival in South Africa in 2018, was mentioned as one of the artistes worth celebrating.

In celebrating Cassper Nyovest, the BeyGOOD account had given the songster’s genres as afrobeat and hip hop. An excited Cassper had shared the tweet, with a surprised “Wow.” 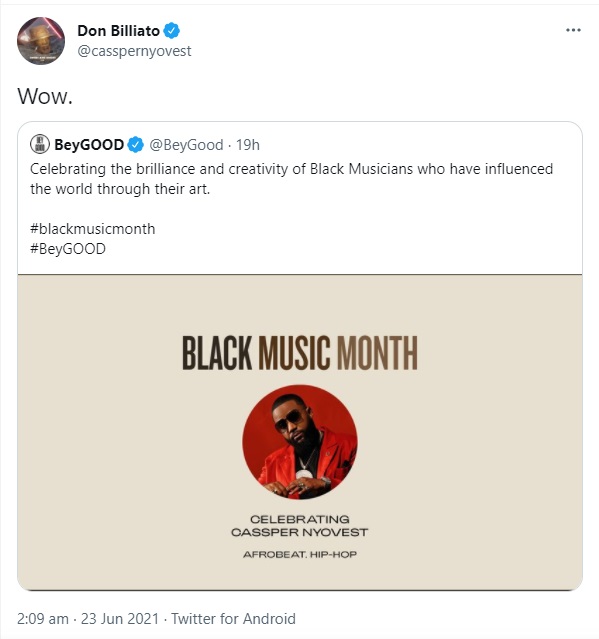 Cassper Nyovest’s selection is nothing surprising, though. The songster has been in top musical form and is justly recognized as one of the finest voices in South African music. During his performance at the Global Citizen Festival of 2018, Jay-Z had reportedly asked who he was.

Cass himself, speaking back in 2015 after filling The Dome for the first, had made it clear that he should be treated like Beyoncé after the milestone

What do you think of Cassper Nyovest getting a shout out from Beyoncé and Global Citizen? You’re welcome to share your thoughts below