The year is almost over and Cassper Nyovest, like a few other public figures, has taken time to reflect on the year.

The songster just turned 30. Taking to Twitter, he had reflected that it was a tough year but he pulled through. He thanked God, stating that he became a different beast, more dangerous, in 2020.

According to him, he became what he became on his own terms, with no teams and nothing but his own gut. Looking back, the songster is right, perhaps. He had founded Family Tree record label and signed himself on. 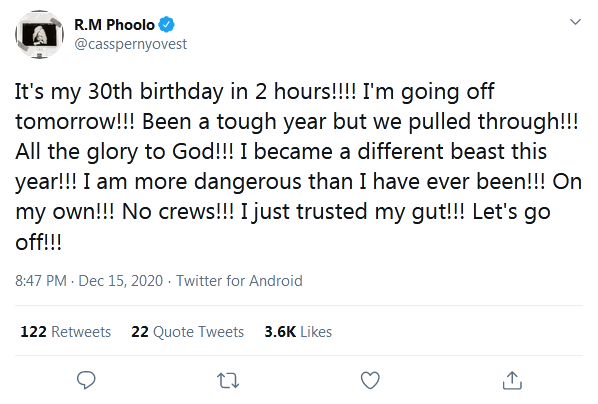 It’s been magical leaps for him since then. Today he is justly recognized as one of the important figures in South African hip hop. For his birthday, besides celebrating the milestone on social media, the “Amademoni” hitmaker had bought himself a gleaming  white Bently Bentayga Mansonry.

Also, he apparently had another career milestone as his fifth project, “Any Minute Now (AMN)” album was unleashed on billboards in Times Square, New York, United States. He is among a select few to male it to the billboard on Times Square.

We invite you to check out the body of work below and join the conversation by dropping your thoughts in the comment section.