Cassper Nyovest has been accused of stealing his new song “Angisho Guys” from Mpura.

Is there a day when Cassper Nyovest isnt dragged or accused of doing something wrong. It suddenly feels like sabotage. The talented Mzansi rapper who has stated that he would be dropping an Amapiano project, kicked it off with the release of “Angisho Guys” featuring Lady Du over the weekend.

The song quickly gained love from everyone who heard it as soon as it dropped. Social media users also noticed that it was similar to Mpura’s release of the same name featuring Mr JazziQ & Soul Revolver. Cass was then accused of stealing the song.

Lady Du who has worked with Mpura defended Mufasa saying the song belongs to him. According to her, Mpura stole it from the original studio. She has stated that she wouldn’t choose loyalty over honesty. She continued to state that Mpura’s version didn’t go far because he didn’t know the entire vision for it.

“He took a song out of the original studio. That’s wrong JR, that’s why it didn’t go anywhere!!! You can steal the plan but not the vision.” 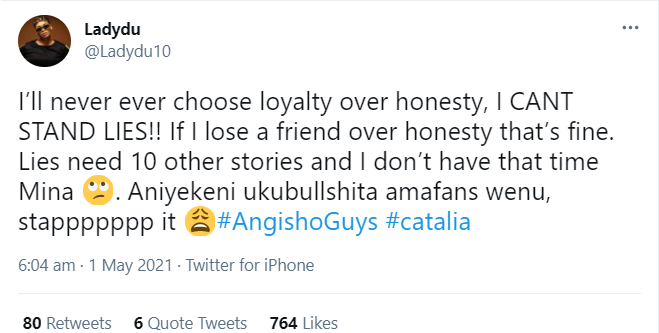