Cassper Nyovest calls off his proposed fight with AKA and says he is more focused on becoming the first SA Hip Hop billionaire.

From last year into this year, fans of SA Hip Hop have been waiting for the fight between rappers, AKA and Cassper Nyovest to happen. Still, it has been one story after another for months now. We all seem to be losing interest by the day.

Both rappers have blamed each other for lack of seriousness and every other flimsy excuse they could think up. A recent post by Mufasa suggests that the fight will no longer happen. He revealed that there has been so many cooks, lies, stunts and egos, which have killed the vibe. According to him, he is bored of it already.

He also revealed that he’s currently working on a project which could make him the first SA Hip Hop billionaire. It should be ready within the first quarter of the year.

“To be honest, that fight probably won’t happen. Too many cooks, lies, stunts, egos. At some point I thought we would come to an agreement but i don’t see it happening anymore & I’m bored of going back and forth. I signed last year and signed again this week and dololo so ANDIZI!” 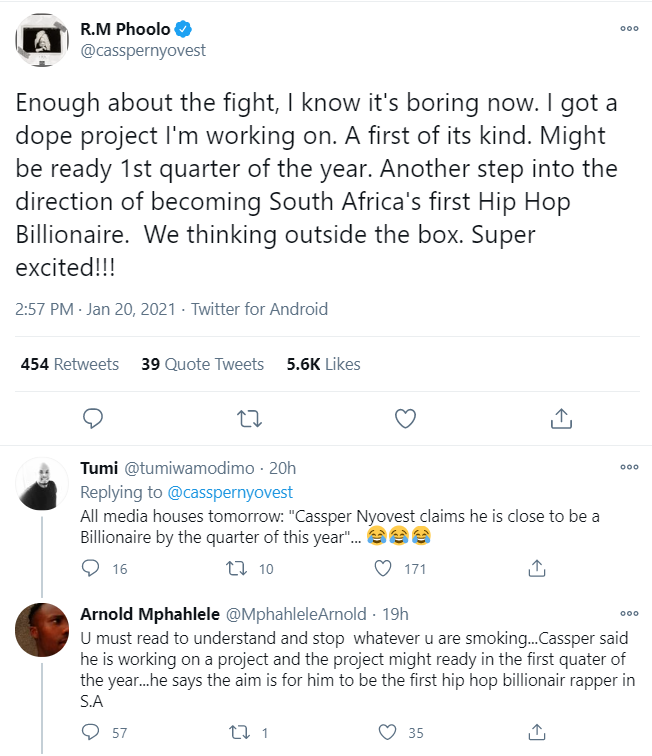