He has just two known public fights, one of which he lost. So Cassper Nyovest saying he’s never lost a boxing match in his life might appear like a comedy of sorts.

But the “Doc Shebeleza” crooner said just that to the amusement of some of his followers on social media.

In a tweet days ago, the songster not noted in all seriousness that he’s never lost a fight. He’d, instead, been giving out beatings. He also claimed he doesn’t know what being punched head feels like. He ended up amplifying his thirst for the match he might have with Priddy Ugly. You can check out the tweet below. 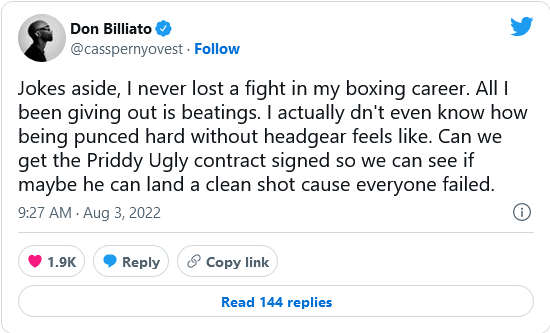 The records show, however, that Cass has only had two boxing matches so far. The first match, held in December 2021, was considered a mismatch because Slik Talk was out of shape and spent all day hugging Cassper in the ring.

Interestingly, the second match was declared the real thing. Cass started on a good note, punching Naakmusiq with ease. Along the line, though, he ended up committing the same sin Slik Talk did. He hugged Naakmusiq for the most part. Naakmusiq was declared the winner of the match.

Tags
Cassper Nyovest
John Israel A Send an email 5 August 2022
Back to top button
Close
We use cookies on our website to give you the most relevant experience by remembering your preferences and repeat visits. By clicking “Accept All”, you consent to the use of ALL the cookies. However, you may visit "Cookie Settings" to provide a controlled consent.
Cookie SettingsAccept All
Manage Privacy