In early May, Cassper Nyovest revealed that his FNB debit was cloned, and someone withdrew substantial funds from his account through it.

We didn’t provide many details beyond that. But around the same period, another notable South African rapper, Duncan, had called out another South African bank on Twitter for wrongfully debiting his account.

Anyway, more details have emerged on how much was debited from Cassper’s account, although he failed to speak about it at the outset. The “Amademoni” rapper had reported the incident to the police and left a statement too. 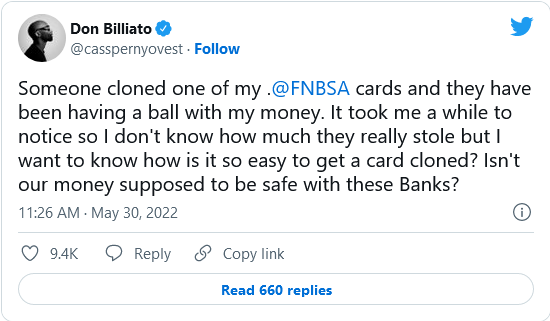 According to the statement, exactly R22k was debited from the rapper’s account. The debit was reportedly made on 16 May 2022 at about 12:00 at Hotel Sky, Corner Maude and West Streets, Sandown, Sandton.

According to reports, the hotel manager was not aware of the transaction. Also, at the time of writing, the Family Tree rapper has not recovered his money.

Cloning credit or debit cards is nothing new. It happens around the world. Cassper’s case, though, has once again brought attention to the need to be vigilant when using one’s cards, whether at the ATM or somewhere else public or online.

You all have got to be vigilant out there.

Tags
Cassper Nyovest
John Israel A Send an email 23 June 2022
Back to top button
Close
We use cookies on our website to give you the most relevant experience by remembering your preferences and repeat visits. By clicking “Accept All”, you consent to the use of ALL the cookies. However, you may visit "Cookie Settings" to provide a controlled consent.
Cookie SettingsAccept All
Manage Privacy