The rivalry continues for AKA and Cassper Nyovest, with the latter challenging the former to get in the ring with him. It’s been a long feud and years of teasing a fight (since 2020), but nothing has come out of it.

Things got a little heated between the estranged pals when AKA said he’d sue everyone who had benefitted from The Braai Show. A court had declared that AKA owned a 50 per cent stake in the show, contrary to a claim made by the other litigant, Cake Media, which hired Cassper Nyovest as the host of the show’s second season.

Cassper Nyovest is gearing for a boxing match with fellow musician Naakmusiq on April 9, and a fan asked Cass if he’d fight AKA soon after the bout with Naakmusiq.

Cassper noted in his reply that the “Fela in Versace” rapper lacked the courage to spar with him in the ring because AKA stands no chance.

He doesn't have the balls to come see me in the ring. Plain and simple. I would love to give him a hiding!!! https://t.co/aL0mQKHQTa

AKA noticed the tweet and reminded Cassper about what his father had him. Following the death of AKA’s fiance Nelli Tembe, Cassper\s father had asked him not to fight AKA.

Cassper Nyovest countered that the songster was ducking when he wanted to fight him. He then challenged AKA to jump into the ring with him after he would have “dropped” Naakmusiq. 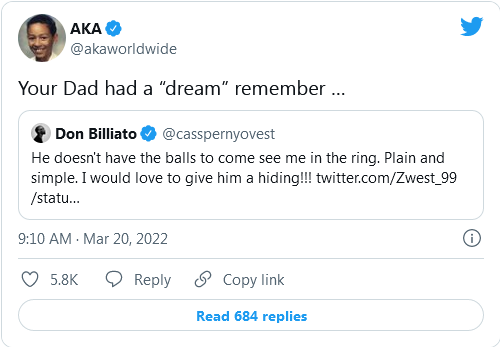 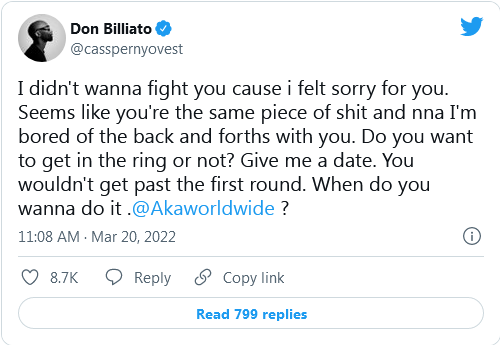 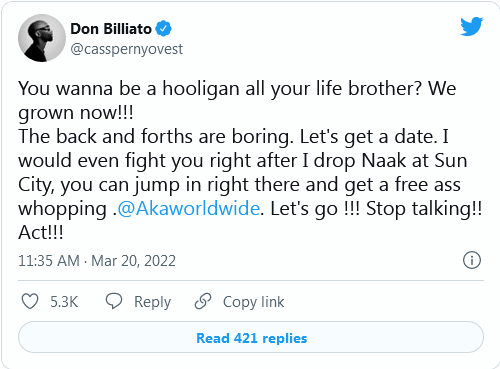 Tags
AKA Cassper Nyovest
John Israel A Send an email 21 March 2022
Back to top button
Close
We use cookies on our website to give you the most relevant experience by remembering your preferences and repeat visits. By clicking “Accept All”, you consent to the use of ALL the cookies. However, you may visit "Cookie Settings" to provide a controlled consent.
Cookie SettingsAccept All
Manage Privacy