For many months, he used “Don Billiato” as his name on Twitter. And then he’d adopted the name for his alcohol brand. What’s with the name “Billiato” as used by Cassper Nyovest?

That’s the question fans have been asking after the songster announced his alcohol brand will be official launched in November.

According to the Family Tree boss, the word “Billiato” is taken from “billion,” which he said is a state of mind, adding it is also taken from Vaal township in South Africa, where people consider themselves to be Italians.

Continuing, he had stated that he created the drink himself. He said “Billiato” is neither gin nor vodka; it’s just “a waste of wealth.” 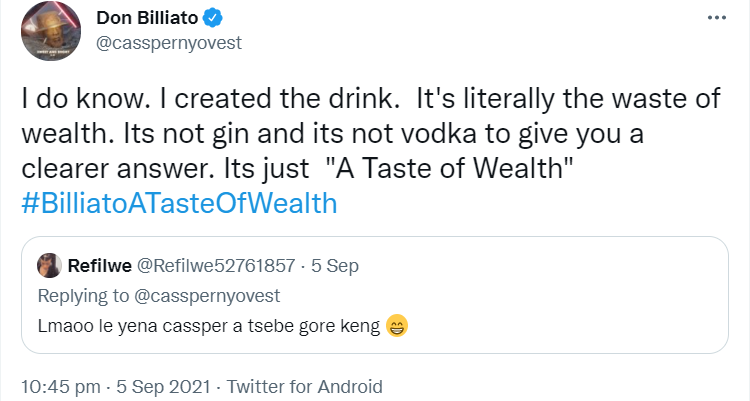 Cassper Nyovest has been talking about money a lot recently. Following his failed fight with AKA of the “Fela in Versace” fame, Cass had an epiphany, and he stated out loud that he actually underestimated himself and should be working to become South Africa’s first hip hop billionaire (in the tradition of Jay-Z in the United States).

Since then, he’s been making big rand moves. He’d announced an R100 million footwear deal with Drip Footwear. And now he’s set to join the alcohol industry, which already has DJ Zinhle, Bonang, and AKA as investors.

Tags
Cassper Nyovest
John Israel A Send an email 7 September 2021
Back to top button
Close
We use cookies on our website to give you the most relevant experience by remembering your preferences and repeat visits. By clicking “Accept All”, you consent to the use of ALL the cookies. However, you may visit "Cookie Settings" to provide a controlled consent.
Cookie SettingsAccept All
Manage Privacy