On April 9, 2022, Refiloe Phoolo, the South African rapper who goes by the stage name Cassper Nyovest, will head into the ring with Naakmusiq, another musician. But what follows after that?

Well, Cass has got an answer. A fan had asked him if Cassper would accept if AKA should request for a fight after Naakmusiq. Cassper was in for the action, of course.

In reply to the fan, he’d noted that he would gladly knock off AKA’s head. He’d been saying the same thing for a while if you’ve been paying attention at all.

Cassper admitted that his imminent opponent Naakmusiq is a tough guy and that after he knocks out Naakmusiq (yeah, he’s confident about beating Naak and has even asked Black Coffee to bet on him, Cass) that AKA would be more afraid to get in the ring with him.

The two major fights he would love this year, according to him are with Prince Kaybee and AKA. He deliberately and contemptuously misspelled their names. See the tweet. 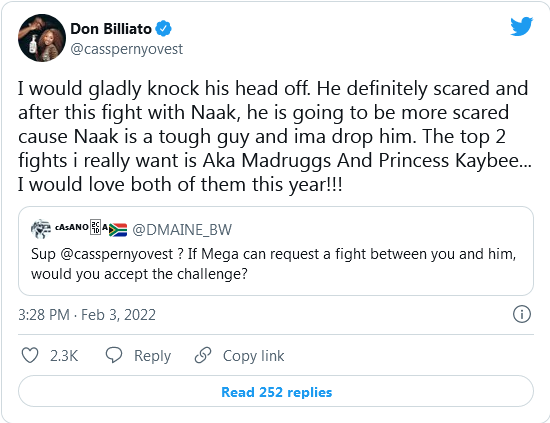 Cassper Nyovest would have fought both of them already, but they couldn’t reach an agreement. Cass accuses them both of being afraid and deliberately making impossible demands, stalling the fight.

Well, watch out for April.

Tags
Cassper Nyovest
John Israel A Send an email 4 February 2022
Back to top button
Close
We use cookies on our website to give you the most relevant experience by remembering your preferences and repeat visits. By clicking “Accept All”, you consent to the use of ALL the cookies. However, you may visit "Cookie Settings" to provide a controlled consent.
Cookie SettingsAccept All
Manage Privacy