Those who were expecting a crisis between Family Tree rapper Cassper Nyovest and DJ Speedsta are in for a big disappointment as the pair have made up after a little misunderstanding.

In case you missed it, DJ Speedsta recently stated that Costa Titch has the best album of 2020. Titch had released “Made In Africa” album earlier this month.

Before then, Cassper has always stated that his “Any Minute Now (AMN)” album, a dedicatory work to his son, is the best South African album of 2020. So when DJ Speedsta came up with his verdict on Costa Titch’s album, Cassper had a good laugh. “Joker!!!” Cassper Nyovest had written as part of his tweet.

DJ Speedsta was forced to clarify that he actually has mad love for Cassper and had no plans to put him down with his take on the best South African album of 2020. He then promised to call Cassper Nyovest later.

The call led to a new revelation. Cassper told DJ Speedsta that that his “Joker!!!” tweet wasn’t directed at the DJ but at Lavida Nota. 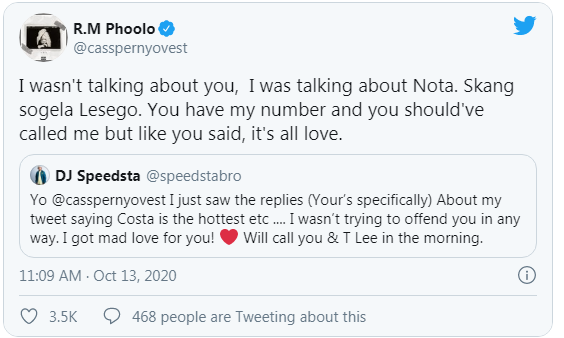 Cassper Nyovest and Lavida Nota have been quarreling online, with Nota claiming Cassper Wouldn’t sign Nasty C because he feared nasty C Might become preeminent above him.