Cassper Nyovest has revealed he is waiting for the right time to instill discipline on AKA.

AKA and Cassper Nyovest have been on a longtime beef action with someone always calling the other out on the Twitter platform, with fans also adding more fuel to the fight.

Recently Supa Mega did the most, as he went on a Twitter rampage, cursing out Cassper Nyovest and his parents. Although it took a while for Cassper to make a statement but when he finally did he stated how angry he was at the tweets.

In other turn of events, Cassper Nyovest has further revealed that he is not ready to let the insults slide, as he will still instill his discipline on AKA, so no one should take is calmness as him being weak. 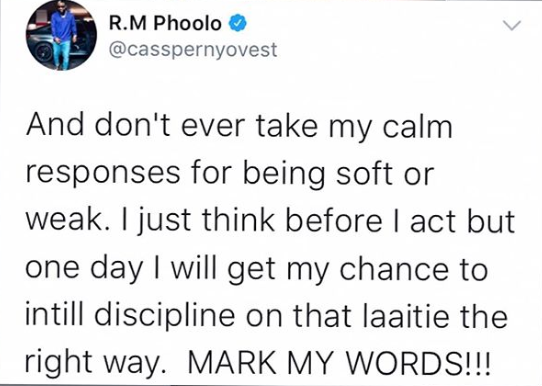 In a Cassper, AKA related news, Mufasa recently mocked AKA on his allegations of being broke, as he admits he is broke too.