If you have been hoping or even praying that Cassper Nyovest should have his own show in Durban, your prayers might long in coming to reality because the Family Tree boss has just revealed he won’t be hosting his performances in the city.

Of course, Cassper Nyovest had been in the city previously. For instance, he’d hosted his #FillUp concert at the Moses Mabhida Stadium in Durban. However, the memory of the politics of that exercise is one he’d love to forget.

And he won’t be going back to Durban. The “Doc Shebelza” hitmaker made this revelation in response to a fan who’d asked him on Twitter to come to Durban. But memories of his previous show’s politics break his heart, and he won’t be returning, although he loves the city and the people love him. 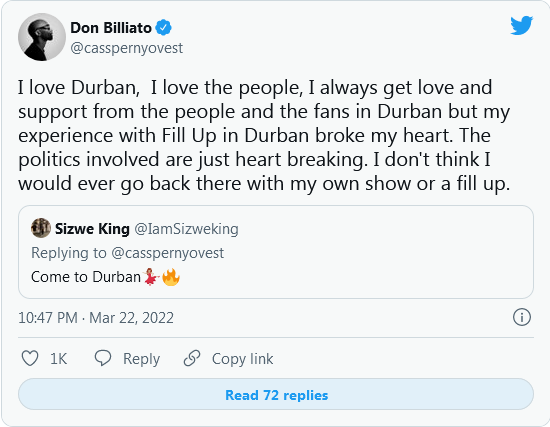 The songster indicated that he’d become too comfortable in South Africa in another tweet. So now he’d be taking on bigger challenges. In the next two years, his dream is to take his fill up campaign abroad and possibly fill up the 20,000 capacity O2 Arena in London. The goal is to be the first South African musician to sell out a show in the O2 Arena. 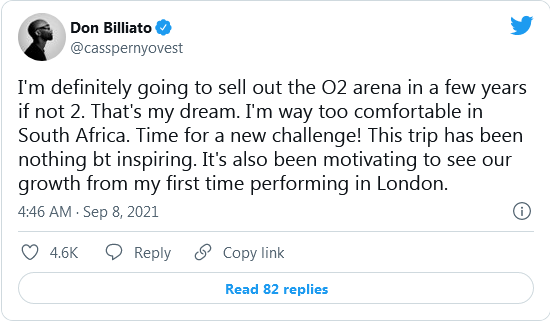 Tags
Cassper Nyovest
John Israel A Send an email 23 March 2022
Back to top button
Close
We use cookies on our website to give you the most relevant experience by remembering your preferences and repeat visits. By clicking “Accept All”, you consent to the use of ALL the cookies. However, you may visit "Cookie Settings" to provide a controlled consent.
Cookie SettingsAccept All
Manage Privacy