Family Tree rapper Cassper Nyovest has clapped back at those assuming he only spoke about the Wits Protest because his hip hop rival AKA had done the same.

A Twitter user who goes by the handle @WaxMixolo had tweeted @CassperNyovest, stating that the “Amademoni” rapper only tweeted because AKA had done the same earlier.

Cassper Nyovest was contemptuous of this assumption, describing the Twitter user and others that might be thinking the same was as dead dumb.  He wondered why students were fighting for their future and an innocent man was killed, yet his critics want him to keep quiet in the face of it all.

He thinks it a pity that peeps should think it a competition instead of an advocacy against police brutality. 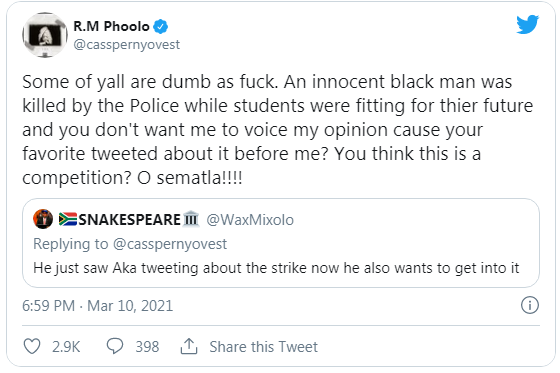 By the way, Cassper is known as much for his music as for his thoughts on social issues, which he doesn’t hesitate sharing with the public now and then. So it isn’t surprising he should drop his ans on the Wits protest.

Well, what do you think of Cassper Nyovest’s response to the assumptions regarding his take on the Wits protest? Ou may want to jon the conversation by droppin your thoughts in the comment section.