Are we about to witness a fist of champions? Slik Talk has just accepted Cassper Nyovest’s boxing match challenge.

In case you missed it, here’s the backstory…

In a recent YouTube video, Slik Talk, a controversial YouTuber, had torn Cassper Nyovest apart, claiming that The Braai Show, currently in its second season and with Cassper Nyovest as host, was terrible. According to Slik Talk, he has never watched a show so bad.

His criticism irritated Cassper Nyovest, who wasted no time tweeting that he would like to meet Slik in the ring for a boxing match. He would give the YouTuber R100k, whether Slik wins or losses. 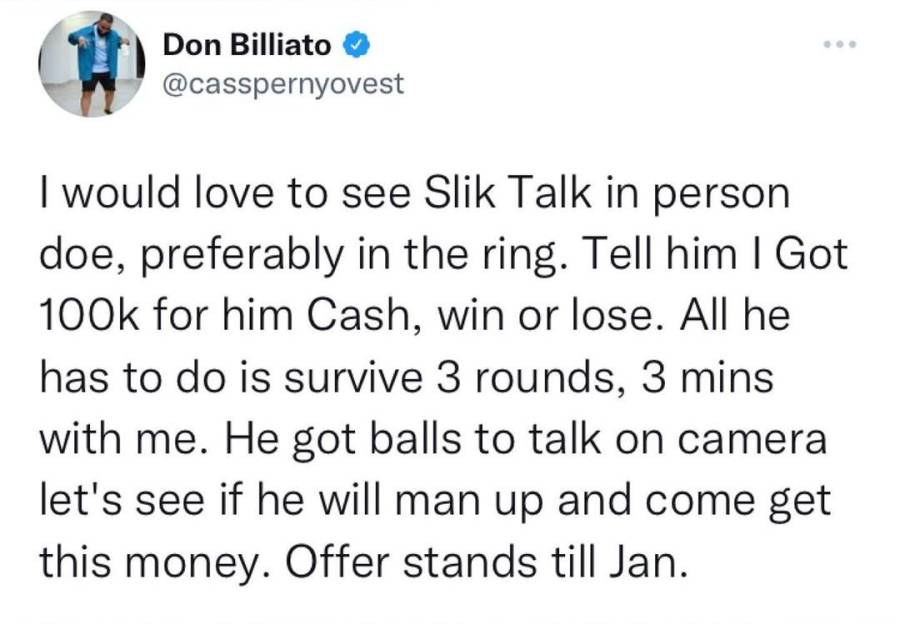 And Slik is in for the challenge. He posted the same on his YouTube channel. According to him, he would stop posting trash about Cassper Nyovest if the Family Tree rapper should defeat him in the ring.

Reacting to Slik Talk accepting the challenge, Cass stated that it is going to be fun and that he’s gotten a little respect for his adversary for taking up the challenge. He then wondered out loud how he would communicate with Slik to fix the match.

This is gonna be fun!!! I won't lie, I grew a lil respect for him for taking up the challenge. Now the tricky part is. How do I communicate with him ? E mail ? Phone ? Whats his official Twitter handle as least… Let's go buddy!!! Enjoy the clout!!! Soon you'll pay for it. https://t.co/FUU32G0VGU

It remains to be seen if the two will eventually hit the ring. None of Cassper Nyovest’s previous planned fights had actually led to an exchange of fists in the ring. Not with AKA. Not with Prince Kaybee. Not with DJ Speedsta. Not with anyone…

Tags
Cassper Nyovest Slik Talk
John Israel A Send an email 22 November 2021
Back to top button
Close
We use cookies on our website to give you the most relevant experience by remembering your preferences and repeat visits. By clicking “Accept All”, you consent to the use of ALL the cookies. However, you may visit "Cookie Settings" to provide a controlled consent.
Cookie SettingsAccept All
Manage Privacy