Cassper Nyovest has treated to a clip of a drunken man, noting people are trying to use the legless bloke to frame his alcohol brand.

The clip showed a man who had passed out from excessive alcohol consumption. Standing next to the man was a bottle of Cassper Nyovest’s alcohol brand Billiato.

So the prevailing opinion was that the fellow had passed out from excessive Billiat consumption. A fan of Cassper shared the clip, noting with two laughing emojis that Cassper’s drink had left the man stoned.

Cass was in good humor and joked that he thinks the fellow drank something else and not his alcohol brand. He ended up telling those who drink to do so responsibly. You can check out the clip below.

Soon enough, another fan had shared a picture of the stoned fellow from a different angle, which appears to show another alcohol brand lying there. Cassper had joyously shared the new photo, thanking “Twitter investigators” for sharing the pic and apparently absolving his brand from any blame. Billiato, which Cassper Nyovest is marketing as a  “taste of wealth,” has been receiving great support from the rapper’s fans, and he’s thankful for the support. He’s already in profit, according to him. 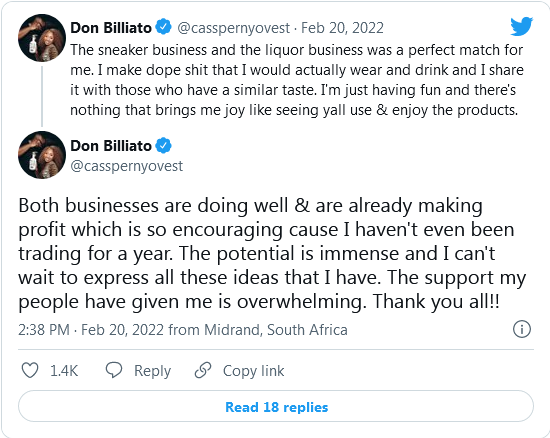 Tags
Billiato Cassper Nyovest
John Israel A Send an email 22 February 2022
Back to top button
Close
We use cookies on our website to give you the most relevant experience by remembering your preferences and repeat visits. By clicking “Accept All”, you consent to the use of ALL the cookies. However, you may visit "Cookie Settings" to provide a controlled consent.
Cookie SettingsAccept All
Manage Privacy