Cassper Nyovest and girlfriend Thobeka Majozi have a newborn son called Khotso,. But before he had named him thus, a fan had said Cassper would give his son the name.

Radio host Anele Mdoda had asked Twitter users to guess the name the Family Tree boss would name his son, and a fan had stated Khotso. When Cassper had his child he called him Khotso.

Cassper Nyovest found out about the prediction only later, and he was surprised, asking how the fan was able to predict that. He then challenged the fan to predict when he would make his first billion. You can check out his post. 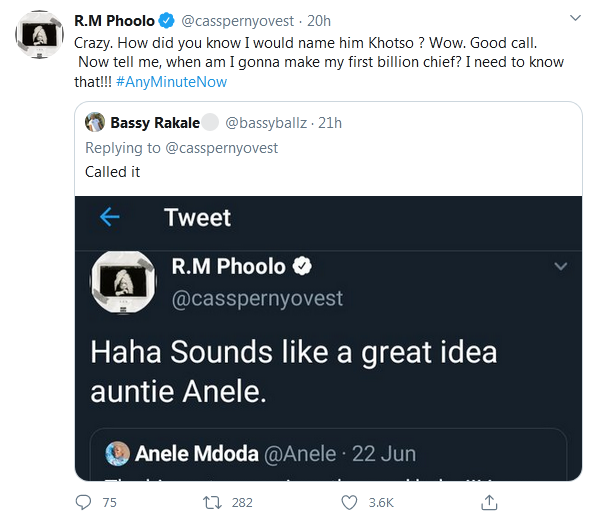 Before the birth of the child, many had named him Simba, which means “Lion” in the Swahili. Many consider Cassper Nyovest a lion, hence the decision to name his son after him, albeit using the Swahili phrase for the animal.

By the wayKhotso is the name of Cassper Nyovest’s late brother. He choose to memorialize the dead by naming his son after him.

Well, have you any idea when Cassper Nyovest will make his first billion? Well, you might want to share that info with the “Amademoni” rapper. He just might fork over a few rands in your direction. Who knows?