Costa Titch recently released a body of work titled “Made In Africa” Album – his debut. That body of work features verses in and local languages, including isiZulu.

Some fans have questioned Costa Titch’s aesthetics and his infatuation with kasi lingo. Some fans questioned whether he was just embracing the culture or appropriating it. One fan even stated he sounds like the Pitori rapper Focalistic.

Well, on the issue of cultural appropriation, Costa Titch has got several supporters, including Stogie T and Cassper Nyovest. Costa Titch is one of the dancers of the latter. 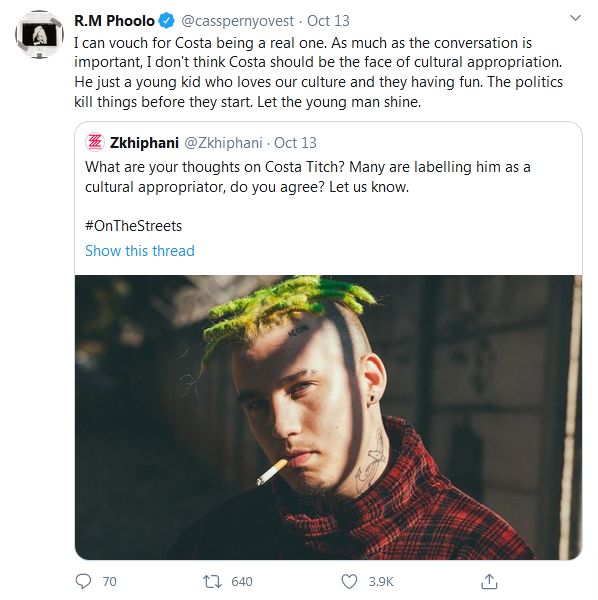 Well, do you think Costa Titch is a cultural appropriator like he had been accused? You might want to join the conversation by dropping your thoughts in the comment section below.

Tags
Cassper Nyovest Costa Titch Stogie T
John Israel A Send an email 15 October 2020
Back to top button
Close
We use cookies on our website to give you the most relevant experience by remembering your preferences and repeat visits. By clicking “Accept All”, you consent to the use of ALL the cookies. However, you may visit "Cookie Settings" to provide a controlled consent.
Cookie SettingsAccept All
Manage Privacy