Family Tree rapper Cassper Nyovest is set to release a documentary series on the making of his “Any Minute Now (AMN)” album, which is dedicated to his imminent son with girlfriend Thobeka Majozi.

The songster announced this in a tweet on 4 September 2020. He said the making of the album was carefully documented. He said he initially wanted to drop one long documentary, but the recording was quite long and so good he had to serialize it. 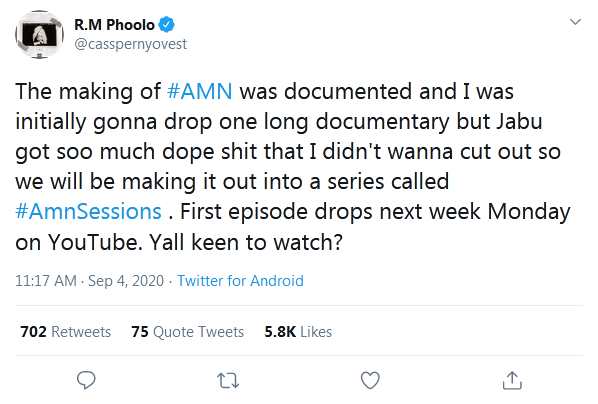 According to him, the first episode drops next week on YouTube. He gave no exact date but we’ll surely share it here with you on release. You can check out his tweet below.

The announcement has caused great excitement among his fans, who have been commenting how they can’t wait to watch the documentary and of course listen to his intensely anticipated “Any Minute Now (AMN)” album, which drops 11 September 2020.

After the release of the album, which Cassper Nyovest has described as a masterpiece, comes the documentary. Both will be available here on release. So do well to follow our social media channels and subscribe to our newsfeed so you don’t miss out.

Have any expectations regarding the docu-\mentary series? Let us hear them.