Cassper Nyovest is touched as the crowd sings the songs off his new album “AMN” word for word.

One of the year’s most anticipated albums, Cassper Nyovest’s “Any Minute Now” has been a huge success since it dropped. The album has gained a lot of praise from SA Hip Hop fans for his work on it.

It seems it isn’t audio love because Cass just saw it with his own two eyes. The Mzansi star kicked off the AMN tour in Bloemfontein where he performed in front of a large crowd of fans who were very happy to have him. He definitely had a great show.

According to Mufasa, the crowd knew every song on the album, word for word. That must have really touched his soul because he took to social media to share. He went on to thank his fans for all the love, and said he was blown away. 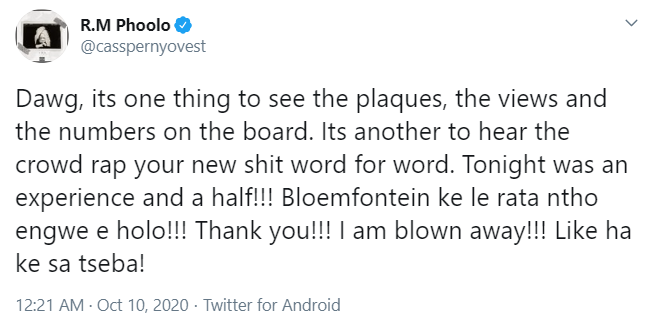