Cassper Nyovest was the talk of town yesterday after he demolished Slik Talk during their boxing match.

One of those who had cheered him to victory was his girlfriend and baby mam Thobeka Majozi. In a post to her Instagram story, she had shared a snapshot from her video call with the Family Tree boss.

In the snap, she had noted that their son was so sad because she didn’t let him watch the show. And although she doesn’t like fighting, she was happy that he defeated his adversary. You can check out the snap below. 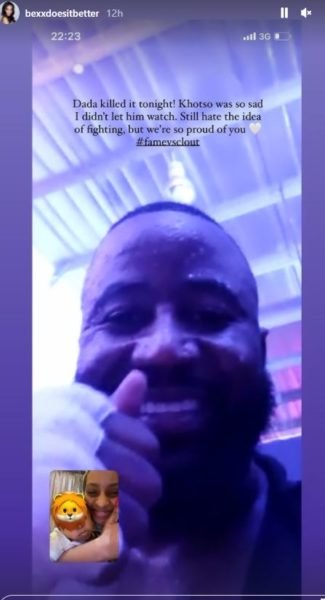 Cassper Nyovest and Thobeka Majozi have dated for a while ad then she had taken in for him and given him a son whose face the couple has adamantly refused to release to the public, Khotso Izwe Simba Phoolo.

Although in a relationship with Casper Nyovest, Thobeka’s love for privacy is well documented. She barely posts stuff about her man, and when he launched his Billiato alcohol brand, many were surprised that she didn’t say anything about that.

Any, while we think the match with Slik Talk is a terrible mismatch, there’s another match that will be worth the name and it’ll pit Cassper Nyovest against Naakmusiq in April 2022.

Tags
Cassper Nyovest Thobeka Majozi
John Israel A Send an email 23 December 2021
Back to top button
Close
We use cookies on our website to give you the most relevant experience by remembering your preferences and repeat visits. By clicking “Accept All”, you consent to the use of ALL the cookies. However, you may visit "Cookie Settings" to provide a controlled consent.
Cookie SettingsAccept All
Manage Privacy