October 1 is about two weeks away, and expectations are already building for the celebrity boxing match between famous rappers Cassper Nyovest and Priddy Ugly. Cass had dared his compatriot for the much, and the other had accepted. Now they’d see who the better fighter is in a matter of weeks.

For Cassper, the mastermind of “Tito Mboweni” and other hits, it’s a game he’s looking forward to because it will determine his future in boxing. According to him, in a recent tweet, if he should knock out Priddy Ugly, he’d challenge Big Zulu in the ring next. The Inkabi Records boss, he says, is someone everyone else has been avoiding.

Not him. But then, he also noted that if he should lose the fight against Priddy Ugly, he would retire from boxing permanently.

The prospect of retiring after a loss doesn’t sit well with some of his fans, however. And one of them asked him if it wasn’t extreme to retire without a win. To that, Cass had responded that he already had a knockout against Priddy, and that should count for something. You can check out the tweets below. 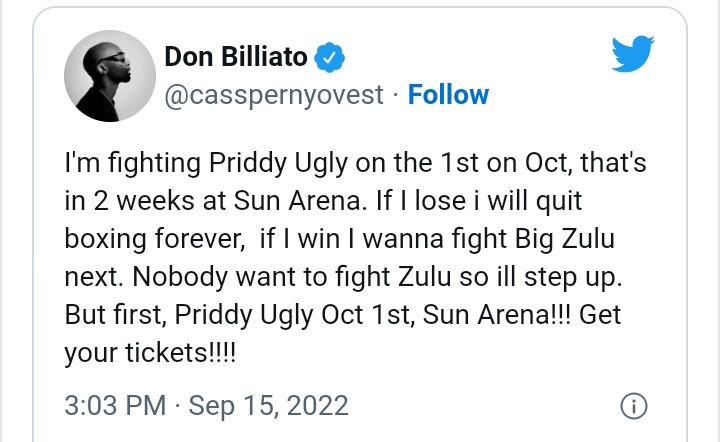 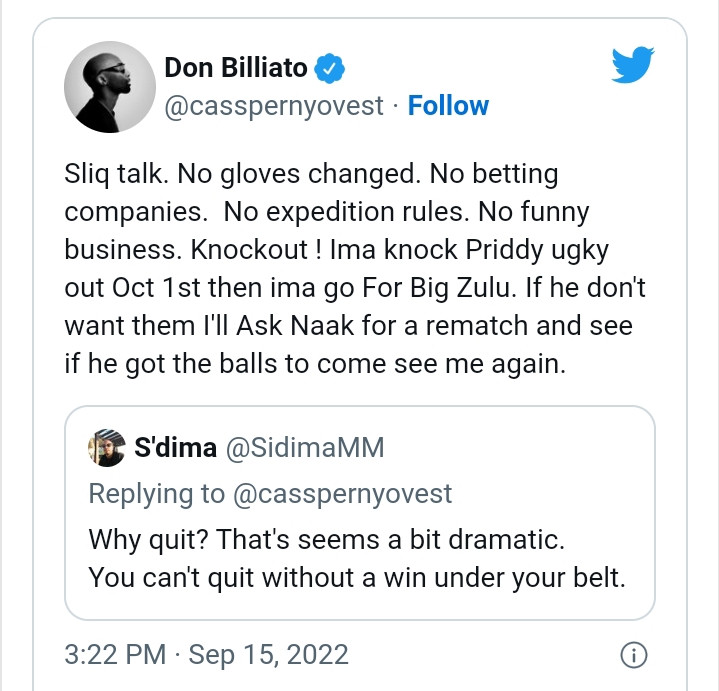 Anyway, we’re flowing events keenly and will bring you details of the forthcoming match. Who’s your money on?

Tags
Cassper Nyovest
John Israel A Send an email 16 September 2022
Back to top button
Close
We use cookies on our website to give you the most relevant experience by remembering your preferences and repeat visits. By clicking “Accept All”, you consent to the use of ALL the cookies. However, you may visit "Cookie Settings" to provide a controlled consent.
Cookie SettingsAccept All
Manage Privacy