Family Tree boss Cassper Nyovest has said that he has about 30 in his imminent “Any Minute Now (AMN)” album. Left to him, he would want to retain all 30 songs in the album because he loves them all.

However – and as he admitted – 30 would be unwieldy and the project just might lack the overall beauty he desires it should have. So he would be cutting down on the number. He didn’t reveal the exact number he would adopt eventually.

He made this clarification on Twitter when a fan asked him what number of tracks are his favourites in the upcoming album. The album contains music for the soul, music he describes in another tweet as the best in the world right now. 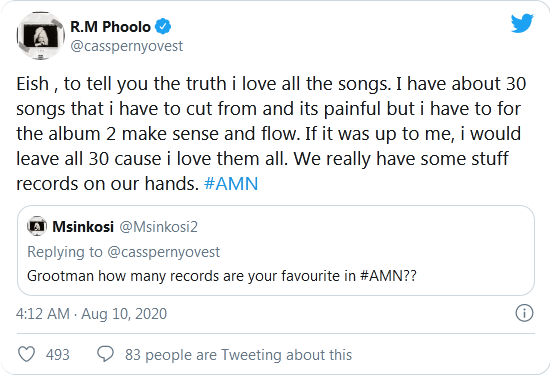 Although information on the number of songs that will make the cut in “AMN” is still sketchy, we know for sure that Busiswa will be featured in the body of work, like musos Mavuso and Zola 7.

The expected date for the release of “AMN” by Cassper Nyovest is 11 September 2020. On that day, fans will certainly get to know if the project was worth the hype. Or what do you think? You may want to drop your thoughts in the comment section below.