Amapiano is currently the in-thing in South Africa, with, many delving into it from other genres, including hip hop. One of those who made early leap from hip hop to piano is Cassper Nyovest. And he has no qualms stating he had opened the doors for other hip hop artists to embrace the genre.

Well, another rapper who jas just embraced the genre – or appears to be trying to – is The Big Hash. The “Peace Be Upon Me” chanter recently shared a clip of him experimenting with piano music.

The reactions were near instant and positive, with tweeps stating what he had created was pretty good, and encouraging him to drop more stuff in the genre.

It turned out that what resonated with the songster the most was the direct message Cassper Nyovest sent him on Instagram. The Big Hash shared the message on Instagram, which showed the Family Tree rapper noting that he’s great and would do well in the piano genre. He encouraged him to make more piano music because he might soon emerge as an important voice in the genre, You can check out the DM below. 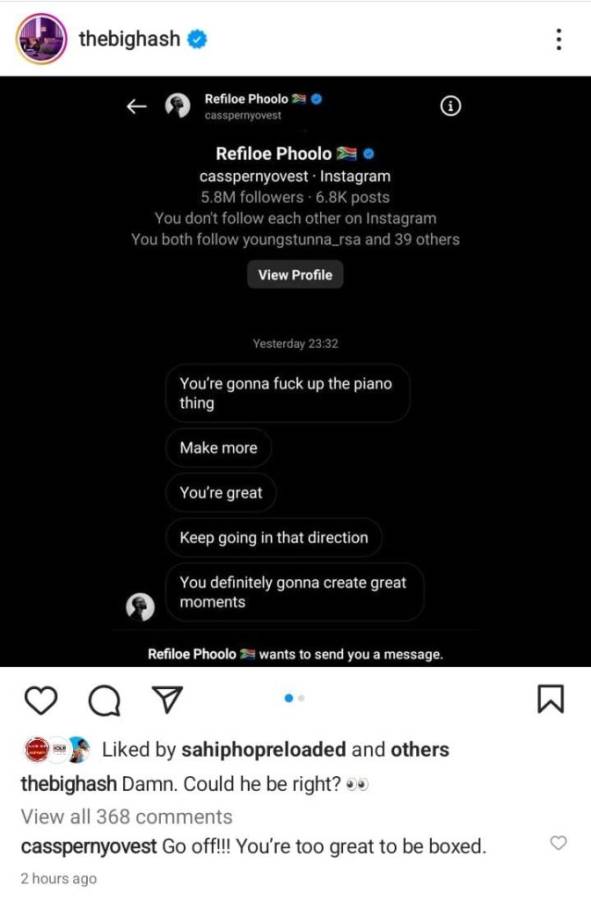 Maybe in the coming months, The Big Hash might be a big thing in amapiano. Who knows?

Tags
Cassper Nyovest The Big Hash
John Israel A13 December 2022
Back to top button
Close
We use cookies on our website to give you the most relevant experience by remembering your preferences and repeat visits. By clicking “Accept All”, you consent to the use of ALL the cookies. However, you may visit "Cookie Settings" to provide a controlled consent.
Cookie SettingsAccept All
Manage Privacy