Cassper Nyovest may be the most beefed and most trolled rapper in Mzansi but it doesn’t affect the sales of his music. It makes you wonder who his true haters are. The “Amademoni” rapper continues to dominate music markets with his dope music.

In December of 2018, the SA Hip Hop star dropped the very successful album “Sweet & Short” and it went platinum in one day. The talented rapper who had also hosted two fillup shows took to Twitter to celebrate his good fortune. We’re sure he had no idea that he’d still be celebrating the same album two years later (it’s actually not even up to two years).

A recent post shared on Aliekeys’ Instagram shows that Cassper’s “Sweet & Short” album has been certified 2x Platinum by the RISA. Amazing right? We can’t wait to see how well his “Any Minute Now” album does a few days from now. 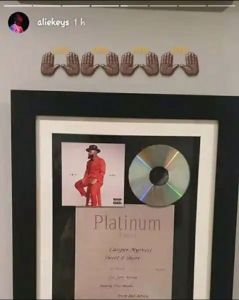