American rapper Ceelo Green has expressed remorse for his comments on Nicki Minaj, Cardi B and Megan Thee Stallion. Days back the songster had criticized the three of them for sharing adult content in their music, which he described as “shameless.”

If you missed the backstory, you can check it out here.

Now, with the world criticizing Ceelo Green’s position and even accusing him of sanctimony, the songster has decided to apologize to the ladies. In a tweet shared yesterday 12 August 2020, the songster spoke of a possible misunderstanding from a quote taken from the interview he gave to promote his new project.

He said he is an advocate or artistic freedom and apologizes to the trio for any inconvenience he might have caused them with his remarks. He said he respects them and their work and always will do.

Specifically, he said he knew Cardi B and her husband Offset personally and even described them as “family.” You may want to read the letters of his apology in the screenshot below. 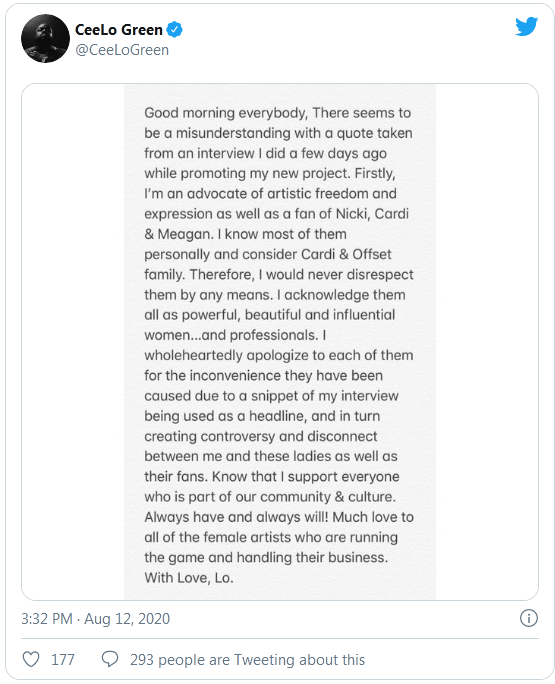 The three artistes are yet to respond to his apology

Well, what do you think of the apology? You might want to join the conversation by dropping your thoughts in the comment section below.