American rapper Ceelo Green has criticized the music of fellow musicians Nicki Minaj, Cardi B, and Megan Thee Stallion, describing them as “Shameless.”

He said, once upon a time, much was coded in the lyrics of a song such that those they were meant for understood them quite all right. Things have changed now, he said. The music – especially those of the troika – is now openly salacious. And he isn’t having it. He insists there should be a time and place for adult content.

On Nicki Minaj, he had this to say: “You have the ‘Heads of State,’ like Nicki Minaj or someone who is up there in accolade: success, visibility, a platform to influence. Nicki could be effective in so many other constructive ways, but it feels desperate,”

He was equally unsparing of Megan Thee Stallion and Cardi B, whose recent WAP video had many “ahing” across the world.

Out on social media, though, Ceelo Green has been accused of sanctimony. Some fans say he is guilty of the same transgressions he is accusing the ladies of. You can check out some fan comments in the screenshots below. 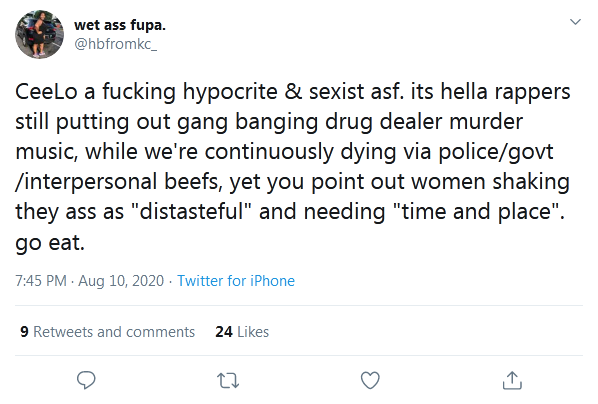 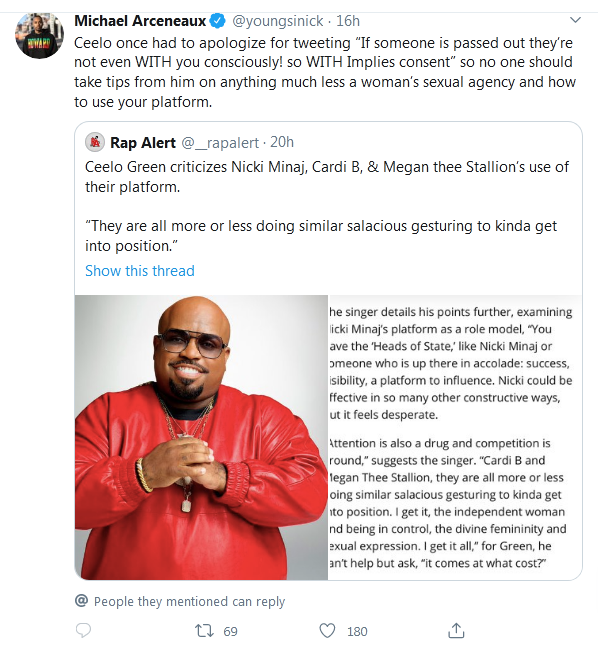 What do you think of Ceele Green’s take on the music of Nicki Minaj, Cardi B, and Megan Thee Stallion? You might want to join the conversation by dropping your thoughts in the comment section below.

Tags
Cardi B Ceelo Green Megan Thee Stallion Nicki Minaj
John Israel A Send an email 11 August 2020
Back to top button
Close
We use cookies on our website to give you the most relevant experience by remembering your preferences and repeat visits. By clicking “Accept All”, you consent to the use of ALL the cookies. However, you may visit "Cookie Settings" to provide a controlled consent.
Cookie SettingsAccept All
Manage Privacy