Cassper Nyovest is optimistic about beating up Naakmusiq when they meet on April 9 this year in what is the most anticipated boxing match in South Africa right now.

Cassper Nyovest had challenged Prince Kaybee, AKA and Naakmusiq to a boxing match. So far, however, only Naakmusiq has responded and agreed to a fight. So a date was set. Tentatively given as April 8 initially, the date was shifted to the 9th, and other details were added, including the venue and where to obtain tickets.

Naakmusiq has begun training for the fight in earnest, and so has his rival. Naakmusiq’a training video had popped online, and some of his supporters began expressing doubts he would beat Cassper Nyovest in the ring. They describe his punches as weak and his legwork as slow.

Cassper himself is confident about destroying Naakmusiq in the ring. In a recent tweet, the family Tree boss noted that once he commits to something, he’s actually dangerous and no one can outdo him.

One of his biggest critics, Nota, shared the same view. According to NOTA, who’s infamous for always criticizing Cassper, the “Do Shebeleza” hitmaker cannot be beaten in his own game. He described the setup as a trap. 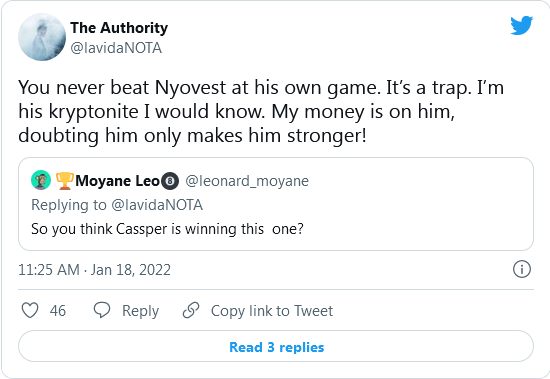 Tags
Cassper Nyovest
John Israel A Send an email 20 January 2022
Back to top button
Close
We use cookies on our website to give you the most relevant experience by remembering your preferences and repeat visits. By clicking “Accept All”, you consent to the use of ALL the cookies. However, you may visit "Cookie Settings" to provide a controlled consent.
Cookie SettingsAccept All
Manage Privacy