Siv Ngesi is challenging Inkabi Records boss Big Zulu to a boxing match in the spirit of the #CelebrityBoxing hashtag, which is currently trending in South Africa.

Big Zulu already has a match scheduled with bolobedu house maestro King Monada. Although his body language indicates he doesn’t want do fight King Monada but someone else, it appears King Monada is not giving up on the fight with Big Zulu just yet.

At any rate, it appears like Big Zulu has got a new match mate, Siv Ngesi having indicated his interest in sparring with the “Imali Eningi” hit maker.

Siv Ngesi made his intentions to fight Big Zulu known via Twitter. The media personality is so confident of a win that, according to him, the only he would have is in deciding what round he would knock Big Zulu out in. 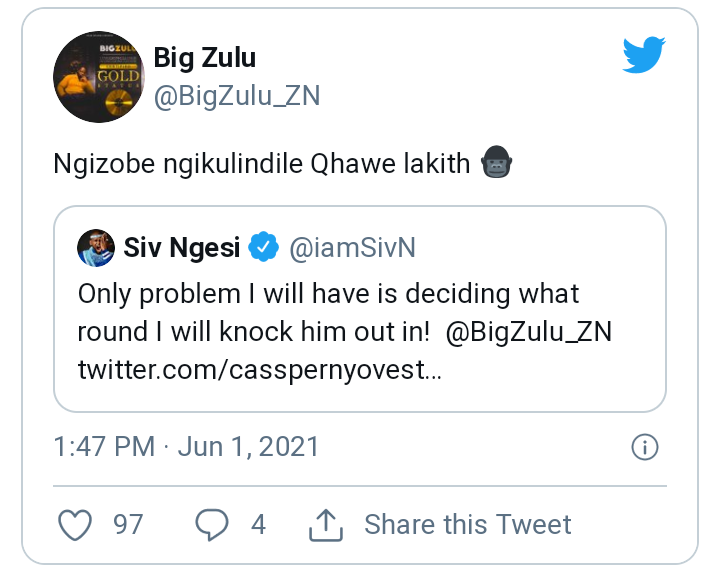 As expected, fans of the two famous figures are already giving reasons why the one or the other would be victorious in the ring when they match.

Well, what do you think of Siv Ngesi challenging Big Zulu to a boxing match in the spirit of the #CelebrityBoxing hashtag? You may want to join the conversation by dropping your thoughts in the comment section below.

Tags
Big Zulu Siv Ngesi
John Israel A Send an email 3 June 2021
Back to top button
Close
We use cookies on our website to give you the most relevant experience by remembering your preferences and repeat visits. By clicking “Accept All”, you consent to the use of ALL the cookies. However, you may visit "Cookie Settings" to provide a controlled consent.
Cookie SettingsAccept All
Manage Privacy