The imminent boxing match between Cassper Nyovest and Slik Talk is one of the core subjects of conversation right now. But what are the new details regarding the fight? Cassper Nyovest has just served those.

The fight would be streamed online, but some fans preferred to watch it live. And they are prepared to pay for it. But coming to watch the fight is just not possible for most, according to Cassper Nyovest.

Responding to a fan who had asked if fans could pay to watch the match at the venue, the songster had said no, noting that the plan was to hold the fight at a roomy venue like Zone 6, but it was expensive to build a temporary ring in the place. So they opted for somewhere else.

The new venue is much smaller, so only a few invited guests will be there to watch the fight live. Those who are keen to watch will have to do so through YouTube, where the fight will be televised. You can check out the post below. 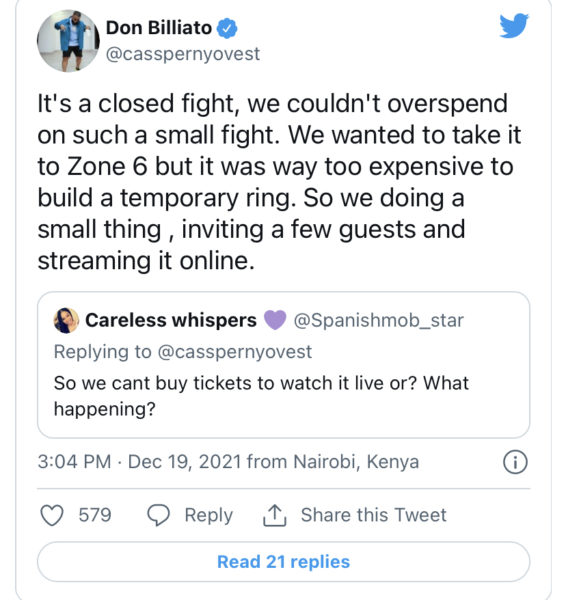 Slik Talk was not the first person Cass wanted to fight. There was AKA, Prince Kaybee, and even DJ Speedsta before him. But as said, they opened their mouth and then ran away.

Slik talk an easy fight. I just need to be well rested. Definitely knocking him out Wednesday!!! I hope the cameraman get the angles right. #FameVsClout https://t.co/R3VyiWKHMN

Tags
Cassper Nyovest Slik Talk
John Israel A Send an email 21 December 2021
Back to top button
Close
We use cookies on our website to give you the most relevant experience by remembering your preferences and repeat visits. By clicking “Accept All”, you consent to the use of ALL the cookies. However, you may visit "Cookie Settings" to provide a controlled consent.
Cookie SettingsAccept All
Manage Privacy