In a move that had many social media users applauding her, Coi Leray had voiced her support for Eminem after her father Benzino insinuated that the “Killshot” rapper should not have been inducted into the Rock and Roll Hame of Fame.

In her tweet, she noted that she was all for equality, respect and forgiveness. She said she has nothing against Eminem, who she described as a talented actor and musician.

She didn’t mention her father Benzino, but almost every who saw her tweet didn’t miss the veiled references. 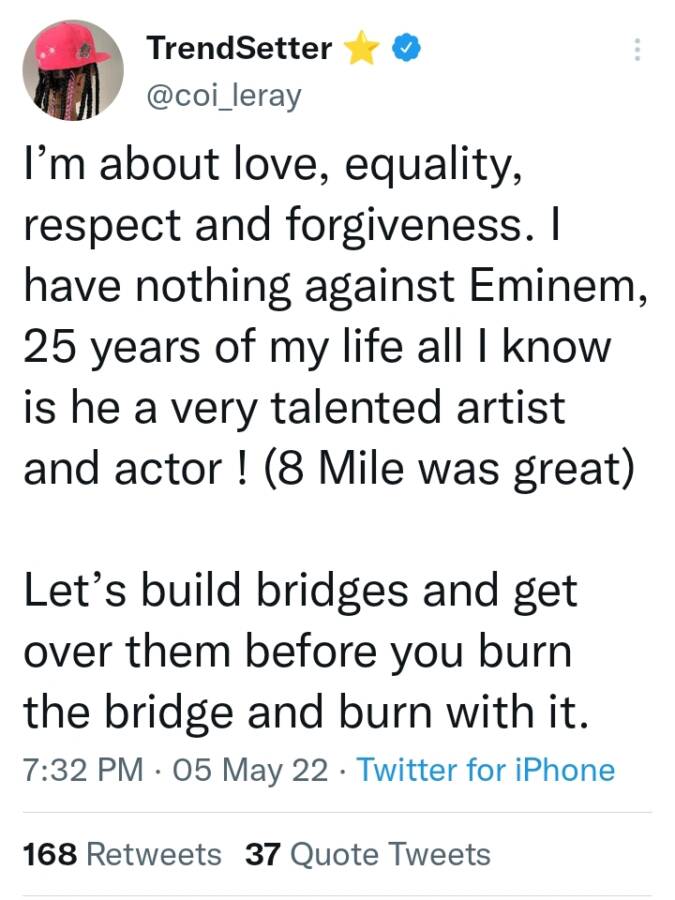 Her tweet came just a day after her father criticised Eminem’s induction into the Rock and Roll Hall of Fame. He likened the Hall of Fame to the Grammy, which he said has no respect for the culture. He listed those who could have been inducted but weren’t, including Nas, Eric B and RAKIM, Kool Moe D, Epmd, Fearless Four, Fat Boyz, Lauren Hill, Little Kim, and OutKast.

Benzino and Eminem have had a beef in the past. And while it’s said that Eminem has moved on, it appears like Benzino is yet to.

Tags
Benzino Coi Leray Eminem USA
John Israel A Send an email 6 May 2022
Back to top button
Close
We use cookies on our website to give you the most relevant experience by remembering your preferences and repeat visits. By clicking “Accept All”, you consent to the use of ALL the cookies. However, you may visit "Cookie Settings" to provide a controlled consent.
Cookie SettingsAccept All
Manage Privacy