After the untimely passing of television actor and producer Shona Ferguson, many including fans wondered if the famed South African Netflix original, Kings of Joburg, would continue with the production of season 2, seeing as Shona was the lead actor as well as a major part of the production team.

But if Connie’s recent IG story is anything to go by, then a new season of Kings of Joburg is well on its way. She shared a picture from behind-the-scenes, posted by television producer Sabelo Mgidi. 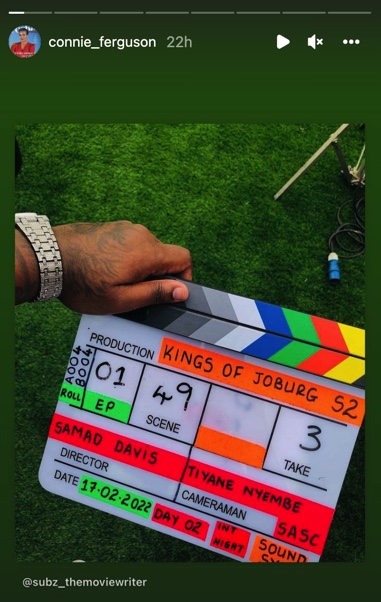 His post read: “KINGS OF JOBURG SEASON 2! After many months with the pen, it’s finally time!!! The KINGS ARE BACK!”

He also shouted out Shona Ferguson, expressing just how proud he is of him, Connie Ferguson, and the rest of the Kings of Joburg production team. Sabelo was also an essential part of the production team for the first season of the show which received great, stunning reviews.

Shona Ferguson, lead actor in the series, passed away on the 30th of July from Covid-19 related complications. He was 47-year-old when he died. His unfortunate death left many shattered and shocked, but Connie seems to have taken the demise in stride, as she’s seen trying her hardest to carry on without the existence of her late hubby.

Tags
Connie Ferguson
Ikedichim Chibundu Send an email 19 February 2022
Back to top button
Close
We use cookies on our website to give you the most relevant experience by remembering your preferences and repeat visits. By clicking “Accept All”, you consent to the use of ALL the cookies. However, you may visit "Cookie Settings" to provide a controlled consent.
Cookie SettingsAccept All
Manage Privacy