It’s a season of remembrance for South African filmmaker Connie Ferguson as she recalls her time with the man she once called her husband.

Shona Ferguson had perished last year from coronavirus complications. Since then, Connie Ferguson had been memorializing him the way she sees fit. She did it again.

It’s been exactly six months since Shona Ferguson died. In a post to her Instagram page, Connie had reflected on the time that has elapsed, noting she hasn’t stopped talking about her man to anyone who would listen.

He might be done, but he’s left a great impression on not just his wife by the two daughters he left behind (one of them is from Connie’s previous marriage). Now it is impossible for Connie to speak with her girls without Shona somehow popping in the conversation.

She also thanked those who have been standing by the family in prayers and in other ways, giving them the much-needed support. You can check out her post below. 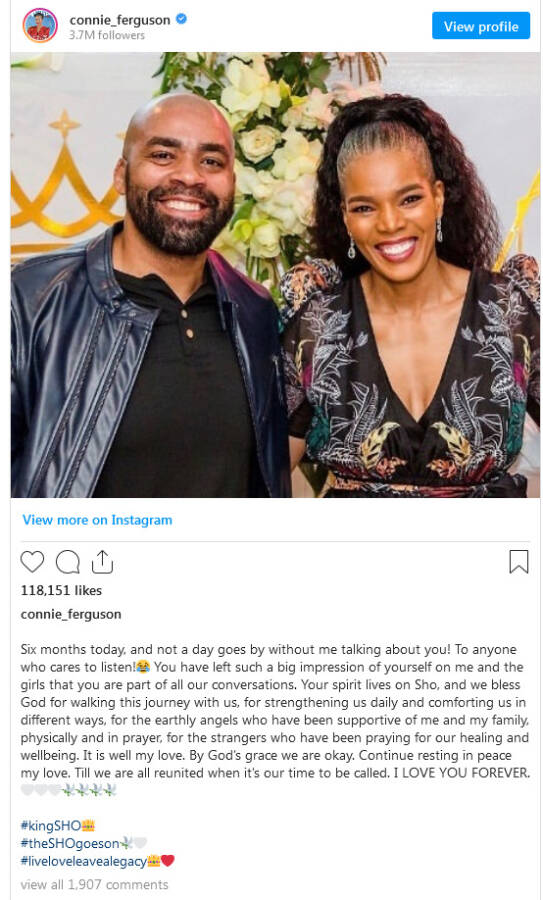 Until his death, Shona and Connie were among South Africa’s most loved couples. The couple had announced plans to build a  film school in South Africa. But then death intruded. Hopefully, it doesn’t put an end to that dream.

Tags
Connie Ferguson Shona Ferguson
John Israel A Send an email 31 January 2022
Back to top button
Close
We use cookies on our website to give you the most relevant experience by remembering your preferences and repeat visits. By clicking “Accept All”, you consent to the use of ALL the cookies. However, you may visit "Cookie Settings" to provide a controlled consent.
Cookie SettingsAccept All
Manage Privacy