Connie Ferguson dropped a profound tweet yesterday following the announcement of the death of celebrated rapper Riky Rick, urging her followers not to be fooled by the façade people create sometimes.

According to the actress, most people are going through a lot, which others might not see. So she urged people to be kind to others, as they might not know what people are contending with away from the spotlight.

The tweet has been liked over 58k times and retweeted over 10k times after she made it, with most of her fans responding in agreement to what she shared. 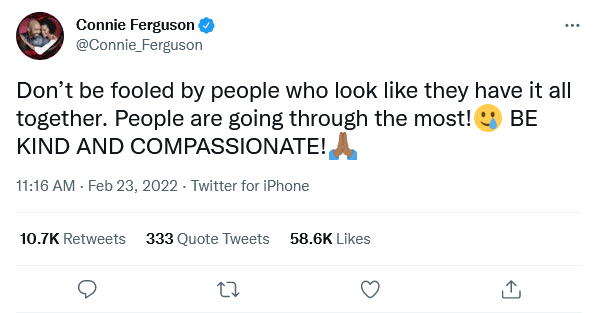 Connie has been through a lot, so she should know. She lost her movie-producer husband Shona Ferguson to coronavirus in July last year. A year after, a “prophet” had claimed that she was afflicted with cancer which was yet to manifest physically.

By the way, Riky Rick had hanged himself yesterday 23 February after making a post that many people suggested showed he was contending with depression. South Africa has been in mourning since, with many across the Rainbow Nation, celebs and ordinary folk alike, celebrating his impact.

It's like he knew that he is going…. pic.twitter.com/OiENubLRNs

Tags
Connie Ferguson
John Israel A Send an email 24 February 2022
Back to top button
Close
We use cookies on our website to give you the most relevant experience by remembering your preferences and repeat visits. By clicking “Accept All”, you consent to the use of ALL the cookies. However, you may visit "Cookie Settings" to provide a controlled consent.
Cookie SettingsAccept All
Manage Privacy