Costa Titch says he wants Nasty C to feature on a remix of his song.

Thinking of dream collabs, it seems Costa’s would be Nasty C. A recent post by the “Made In Africa” hit maker sort of proves this. He shared a clip of himself promoting his song “Durban Poison” which is featured on his debut album.

In the post captions, he revealed that he is trying to get Nasty C to feature on the song’s remix. He also urged his followers to tag the “There They Go” star to make it happen. The post also got reactions from fellow SA Hip Hop acts including Tweezy, and more.

We have no idea if that is going to happen because Nasty is yet to react to the post. It definitely would be nice to see the both of them on a song together. We just might get lucky this time. 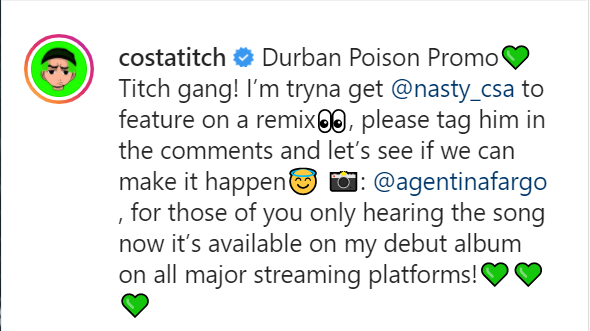 Tags
Costa Titch Nasty C
John Jabulani Send an email 18 January 2021
Back to top button
Close
We use cookies on our website to give you the most relevant experience by remembering your preferences and repeat visits. By clicking “Accept All”, you consent to the use of ALL the cookies. However, you may visit "Cookie Settings" to provide a controlled consent.
Cookie SettingsAccept All
Manage Privacy