Cassper Nyovest popped on Mzansi Twitter trends again after what many South Africans consider a magical performance at Cotton Fest, a music festival founded by his late pal Riky Rick.

The ‘Boss Zonke” hitmaker had hung himself in his studio on February 23 after a protracted battle with depression, throwing South Africa into a state of mourning.

He might be dead by his legacy is very much alive, and Cassper Nyovest ha e a new sheen to that legacy by putting up a performance that people have been talking about since.

During his outing, the Family Tree performed “Mama I Made It” and “Tito Mboweni,” two of his several hit songs.

Fans who watched the performance thought he killed it. They also emphasised that he’s seriously loved and easily one of the best liver performers in the Rainbow Nation. You can check out some of the reactions below. 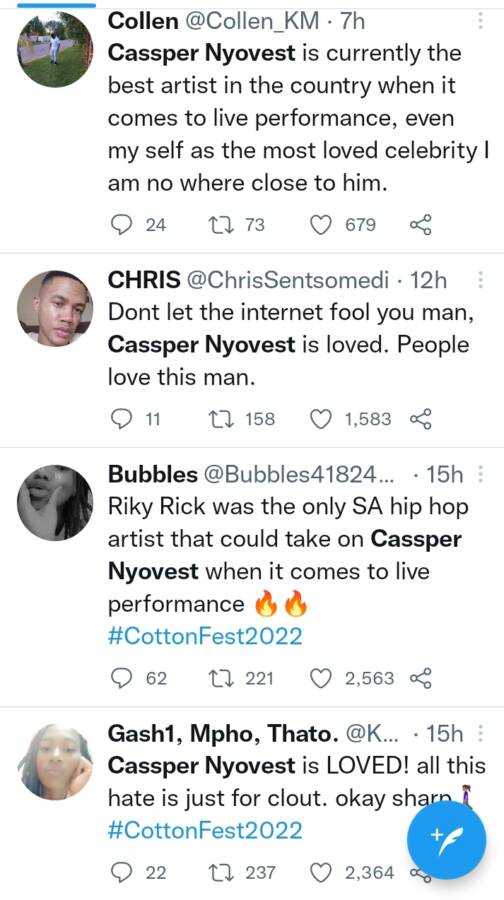 Although this edition of Cotton Fest went without the founder, it was as well attended as previous festivals when Riky Rick was alive and guiding. Still, the lineup for this year’s festival elicited great criticism at the outset because some peeps thought it had way too many amapiano artists for a hip hop festival.

Tags
Cassper Nyovest Cotton Fest
John Israel A Send an email 24 April 2022
Back to top button
Close
We use cookies on our website to give you the most relevant experience by remembering your preferences and repeat visits. By clicking “Accept All”, you consent to the use of ALL the cookies. However, you may visit "Cookie Settings" to provide a controlled consent.
Cookie SettingsAccept All
Manage Privacy