South Africa is still on lockdown (level 3) and artistes, who are mostly affected by it all, are not smiling. Among those displeased with the handling of it all is Kelly Khumalo. She has called out the minister of arts and culture Nathi Mthethwa, accusing him of not taking care of artistes in the entertainment industry.

The minister did not respond to her call out. But her fans did. Some of them sympathized with her, stating that the minister doesn’t care because his salary is not affected in any way.

To this Kelly Khumalo suggested, facetiously, of course, that artistes move in with the minister so that he can start taking care of them. 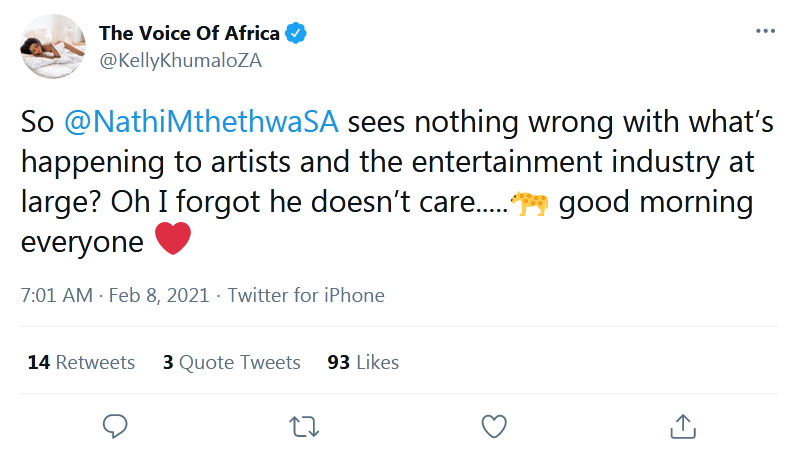 The reality on the ground is that most entertainers have lost their incomes as a result of the pandemic and the lockdown in the country. The first time the country went into lockdown, during the first wave of the pandemic, in 2020, artistes who had been unable to work for months poured into the streets in protest.

Well, what do you think of Kelly Khumalo calling out the minister for not caring about the entertainment industry? You might want to join the conversation by dropping your thoughts in the comment section below

Tags
Kelly Khumalo
John Israel A Send an email 10 February 2021
Back to top button
Close
We use cookies on our website to give you the most relevant experience by remembering your preferences and repeat visits. By clicking “Accept All”, you consent to the use of ALL the cookies. However, you may visit "Cookie Settings" to provide a controlled consent.
Cookie SettingsAccept All
Manage Privacy