South African musician Cruz Afrika has been hospitalized for an undisclosed issue.

There crying and a heartbroken emojis was all he shared, as part of the caption to his post, which also had a call to his YouTube channel. You can check out the post below. 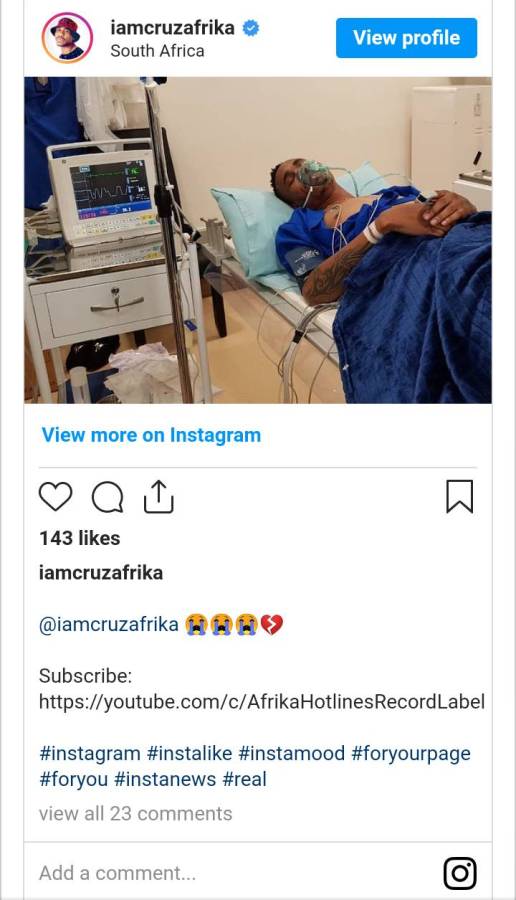 He may not have clued fans in on what the problem with his health might be, but his fans were Unanimous in wishing him a quick recovery and a return to the good life.

Cruz Vodka courted controversy recently when he shared a clip of fellow musician Emtee, stating that the songster was going through a bad phase and needed help.

Before then Emtee had implored Chad Da Don not to work with him (Cruz) because the songster was an ingrate who would end up hurtling those who help him.

Prior 5o being hospitalised, Cruz Afrika had celebrated buying a BMW, a dream come true for him. He had also celebrated himself as the first South African to have a Louis Vuitton car roof.

Tags
Cruz Afrika
John Israel A Send an email 8 November 2021
Back to top button
Close
We use cookies on our website to give you the most relevant experience by remembering your preferences and repeat visits. By clicking “Accept All”, you consent to the use of ALL the cookies. However, you may visit "Cookie Settings" to provide a controlled consent.
Cookie SettingsAccept All
Manage Privacy