The fight between House of BNG boss Bonang Matheba and Davin Phillips of Celebrity Services Africa (CSA) is clearly not over, as Bonang stormed social media gain to accuse the collective of trying to steal her hard work.

The conflict between Bonang and CSA erupted last year after the businesswoman took to social media to announce that her partnership with the brand was over with immediate effect. She accused the brand of exploitation and of trying to steal the brand she worked to create.

She also informed her followers she’d told her lawyers to institute criminal proceedings against CSA.

At the time, CSA had countered in a statement claiming that Bonang was in breach of multiple contracts with various clients and has been derelict to those brands and her own.”

The case appeared to have died down – well, until Bonang popped on Twitter on May 19, telling her fans she couldn’t wait to fill them in on the “monster” Davin Phillips.

In a follow-up post, she noted that one thing she’d always do is stand up for herself publicly.  She accused Davin of taking her family through her for the past two years. It’s unclear what sparked the latest outburst, but you can check out her tweets below. 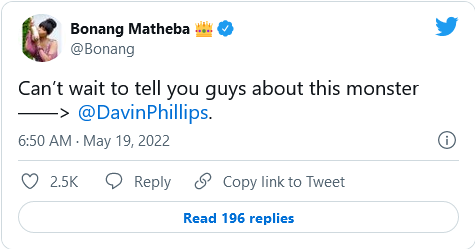 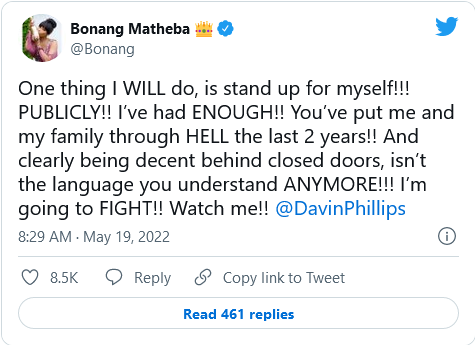 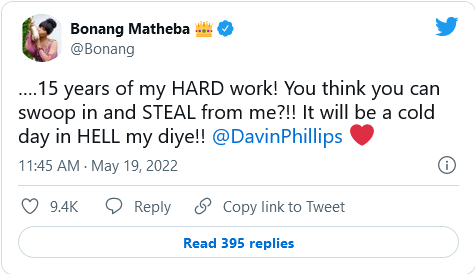 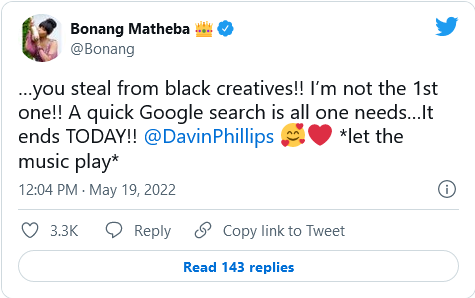 Tags
Bonang Davin Phillips
John Israel A Send an email 21 May 2022
Back to top button
Close
We use cookies on our website to give you the most relevant experience by remembering your preferences and repeat visits. By clicking “Accept All”, you consent to the use of ALL the cookies. However, you may visit "Cookie Settings" to provide a controlled consent.
Cookie SettingsAccept All
Manage Privacy