Mzansi might be debating whether or not Aurea Alexander had a fling with her baby dady Da LES’s friend AKA, but it’s clear the socialist is unbothered about what’s going on.

She’s apparently “too blessed to be stressed” – or so she mphasized on her Instagram stories, sharing a picture of her and Da LES on a bath and enjoying each other’s company.

The past few had reekedd of seamy rumours regarding AKA’s relationship with Aurea Alexander while he was dating Nelli Tembe.

Controversial podcast host Mac G had read out a letter he said he received from an anonymous Tembe family member. The letter had claimed that AKA had cheated on Nelli Tembe with Aurea Alexander and had paid her R20k to keep her silent on their fling.

Nelli Tembe had reportedly discovered sexual messages between AKA and Aurea and shared them with Da LES’s, who was said to have released the song “Gucci Snakes” to memorialize AKA’s fling with Aurea.

It appears Aurea and Da LES, who share a daughter, are still together and cannot be bothered what the public is debating about their relationship. That appears to be the message in the picturre Aurea share, which you can check out below. 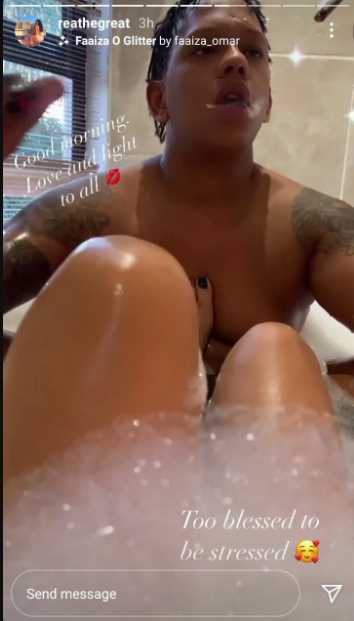