Things appear to be going great in the relationship department for DBN Gogo and fans are happy for her.

Hitherto quiet about her relationship, DBN Gogo had hinted about being in a romantic relationship in a recent tweet.

She and her man had apparently gone out to look for an outfit for her. But then her man had taken over, doing all her shopping while she sits and waits on the couch.

A fan of hers had noted that he loved that, adding that this year men would be letting their women wait while they shop for them. Lady Du saw the tweet and joked in the following words, “Never again” You can check out the complete tweets below. 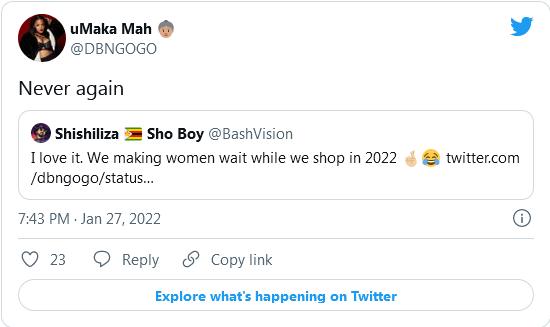 The reactions to DBN Gogo’s tweet were mostly positive, with her fans wishing her the best in her relationship, sans any drama.

Easily one of the buzzing figures in South Africa’s amapiano space, Lady Du recently made the cover of Glamour magazine. Soon after her cover appearance, she had reached a milestone of over 1 million followers on Instagram.

And with things falling in the right places for her in the relationship department, one may as well say that even greater days lie ahead for the musician

Tags
DBN Gogo
John Israel A Send an email 29 January 2022
Back to top button
Close
We use cookies on our website to give you the most relevant experience by remembering your preferences and repeat visits. By clicking “Accept All”, you consent to the use of ALL the cookies. However, you may visit "Cookie Settings" to provide a controlled consent.
Cookie SettingsAccept All
Manage Privacy