It was Deborah Fraser’s finest hour recently as she received an honorary doctorate degree from the Trinity International Bible University. The singer joined several other figures who received similar recognition, including Dr. Noxolo Grootboom.

Her win provoked a wave of congratulations from fans, as well as those familiar with her impact in South Africa’s music and entertainment universe.

In a recent post, Sbu Noah congratulated her on the win, stating there was none more deserving than her. He ended up stating he’s so happy about her win. You can check out his post below.

“Jerusalema” songstress Nomcebo Zikode also took to Instagram to celebrate Deborah Fraser, noting the singer finally got the respect she deserves after 36 years of making music.

She urged her fans to join her to congratulate the singer, who she said gave South Africa timeless music after she popped on the music scene in 1985. 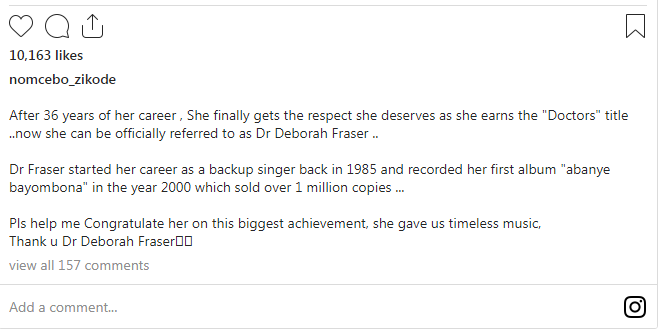 While Deborah Fraser has been in the industry for more than three decades, she clarified that her musical journey isn’t defined by the accolades she had bagged.

Prior to her award, she had shared a throwback picture that showed her in the company of her friends, including the late Brenda Fassie. Some solidarity.

Tags
Deborah Fraser
John Israel A1 November 2021
Back to top button
Close
We use cookies on our website to give you the most relevant experience by remembering your preferences and repeat visits. By clicking “Accept All”, you consent to the use of ALL the cookies. However, you may visit "Cookie Settings" to provide a controlled consent.
Cookie SettingsAccept All
Manage Privacy