Apparently Emtee is one of those musicians who record songs with international artistes but never get to see them released. It has emerged that the “Prayer” trapper recorded a song with America’s Trey Songz, but it was never released.

Emtee made this revelation in a recent Q&A with his fans. He accused Ambitiouz Entertainment, the record label to which he was previously signed, of getting in the way of his international collaborations, among other petty annoyances.

It was one of the reasons, in fact, that he left the record label. But before then, the master of “We Up” and other songs, had trended the hashtag #FreeEmtee, leaving no one in doubt his soul was no longer with Ambitiouz.  The departure was acrimonious, like the departure of some other artistes from the record label, including Cici.

Speaking on about the failed song with Trey Songz, he stated that Songz’s team wanted to fly him (Emtee) to the United States, but Ambitiouz entertainment made sure he didn’t get a visa. The record label is yet to deny this claim. 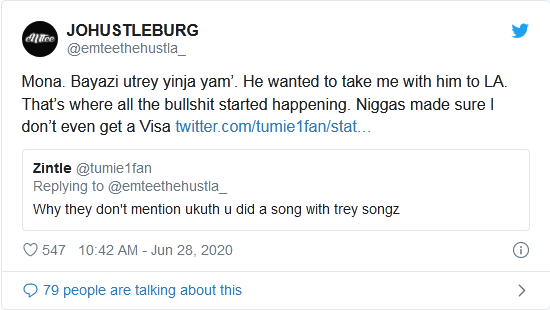 Well, whatdo you think of the song that never was and Emtee’s claim Ambitiouz Entertainment provoked the whole misfortune? You may want to join the conversation by dropping your thoughts in the comment section.